In the fall of 2010 Abbey D’Agostino ’14 arrived on campus to compete on the cross-country team. Four years and seven national titles later, she’s become one of the most successful athletes in Dartmouth history. 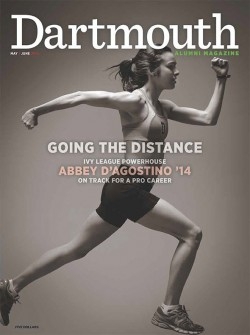 With her collegiate career winding down, Abbey D’Agostino ’14 has her eyes set on a professional career. (Photo courtesy of “Dartmouth Alumni Magazine.”)

Abbey D’Agostino turned onto the final straightaway of the NCAA cross-country championship course in Terre Haute, Ind., just a quarter mile from the one collegiate title that had eluded her.

With black arm-warmers her only visible nod to the rough conditions that November day last year—high winds and 30-degree temperatures put the wind chill in the teens and the course was a muddy mess after two days of rain—D’Agostino had a straight line to victory. But it wasn’t a done deal: Emma Bates of Boise State and Kate Avery of Iona College were still in dogged pursuit.

D’Agostino, 21, the overwhelming favorite, carried the weight of expectations on her petite frame (she stands 5 feet, 2 1/2 inches in her racing spikes). She had near misses in her two previous attempts at a cross-country title. In 2011 she placed third, 1.7 seconds behind the winner. In 2012 she had been second, 0.7 seconds from the win. Even though she has won multiple national titles on the track—the indoor 5,000 and 3,000 meters in 2013 and the outdoor 5,000 meters in 2012 and 2013—her resume was not complete. D’Agostino wanted this one.

Her brow furrowed, no sign of the toothy grin that she’s famous for, mud caking her legs and her powerful arms driving her through the wind, D’Agostino charged toward the finish line. As she came into view it became clear to spectators that the other runners were vying for second.

“I vaguely remember being in disbelief that the other top girls had fallen behind, Bates especially,” D’Agostino says. “I knew I could win, but I didn’t anticipate gapping them that drastically. What struck me in that moment was that I had been given a gift. The entire situation—the lead I had, the strength I felt, the fact that the team was there—was such a blessing and something powerful was happening to me.”

D’Agostino sprinted across the line in 20:00.3, ahead of Bates, who was second in 20:03.9 on the 6-kilometer course. The margin of victory looks small on paper, but with elite athletes running at full speed, an 18-wheeler could fit into those three seconds. “Those aren’t conditions that she runs well in, so it showed her dominance,” says Mark Coogan, the women’s cross-country coach.

With her victory D’Agostino became the first Ivy League runner, male or female, to win the NCAA cross-country title. Once over the line she turned around to watch the rest of the Dartmouth squad come in. D’Agostino’s peers say she’s the consummate teammate, focused on their successes and improvement, psyching them up before big races and workouts with emails that range from funny to inspirational.