This story was originally published in the Dartmouth College Fund’s spring 2014 issue of From the GREEN.

Ryan Hueston ’14, of Montgomery, Ala., and southern California, is a studio art major with a minor in film and media studies. His work is displayed throughout the Dartmouth campus, including the Admissions Office, Class of 1953 Commons, and the Class of 1978 Life Sciences Center. Ryan is currently working on his senior honors thesis, a series of paintings exploring themes of bipolar disorder. 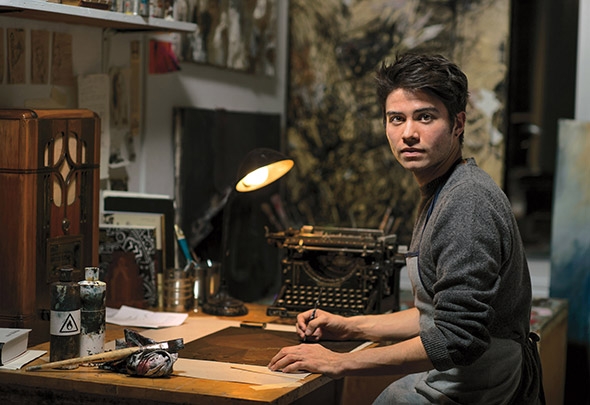 “Slowly, through the help of my studio art professors at Dartmouth, I realized I had a visual flair and creative energy and imagination,” says Ryan Hueston ’14. (Photo by RL Photo Studio)

Hueston spoke with From the GREEN about his time at Dartmouth.

“I’ve taken a studio art class every term since my first term here. I started from a place of insecurity as a freshman: I went to an art conservatory in California for high school, and I was surrounded by a whole bunch of incredibly talented, high-accomplishing individuals. It was an environment where I felt that having a creative spirit and an unquenchable desire to create or perform was part of the norm, and I didn’t think that my creative side was particularly powerful or compelling, or that I had something to contribute.

“Slowly, through the help of my studio art professors at Dartmouth, I realized I had a visual flair and creative energy and imagination. I found a voice as an individual, which was exciting, powerful, and enormously liberating. It freed a part of me that was insecure, suppressed, and just unhappy with being insecure and suppressed. I wanted to let it all out, and I did—and I thrived from it. It was wonderful, like growing in a garden. As my portfolio grew, and as I continued to take classes, I found a real community—not just art professors but the entire studio art department. All the people creating in this building—they’re going through the same things I am.

“Having studio space and a creative environment is great; it gives you a place where you can do whatever you want. And when you’re done, you have these artifacts that are like the Stonehenge of your own life—this sweet spot of work that is your mark on this Earth. It is so satisfying to make that mark, no matter how small or temporary.”