The Ivy League champion Dartmouth softball team is headed to Arizona for the first round of the 2014 NCAA Division I Softball Championships. The Big Green, which enters the championship tournament with a record of 31 wins and 17 losses, is one of four teams in the Tempe regional. The Big Green will meet the Arizona State Sun Devils on Friday, May 16, in the opening game of the double-elimination regional. The Sun Devils enter the tournament with a record of 44 wins, 10 losses, and one tie. Joining Dartmouth in Tempe will be San Diego State and the University of Michigan. 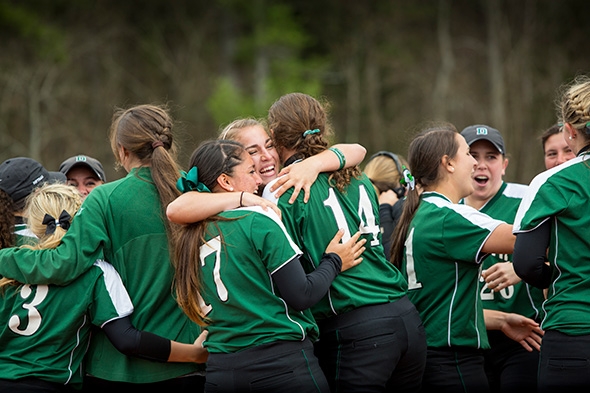 The Big Green softball team won the Ivy League Championship on May 4, earning an automatic bid to the NCAA Tournament. (Photo by Mark Washburn)

“We are incredibly excited to represent Dartmouth in the NCAA Tournament,” said head coach Rachel Hanson. “We are excited to meet Arizona State and play on ESPNU.”

All of the games at the Tempe regional will be televised on ESPNU. The regional begins on Friday with the University of Michigan and San Diego State facing off at 3:30 p.m. EST. Dartmouth and Arizona State take the field in the second game at 6 p.m. EST.

The Big Green received the Ivy League’s automatic bid to the NCAA tournament after defeating the University of Pennsylvania in the league championship series.