History was made in front of a sell-out crowd on Sunday afternoon as the Dartmouth softball team captured its first-ever Ivy League Championship with a 7-3 victory over the University of Pennsylvania at the Dartmouth Softball Park. 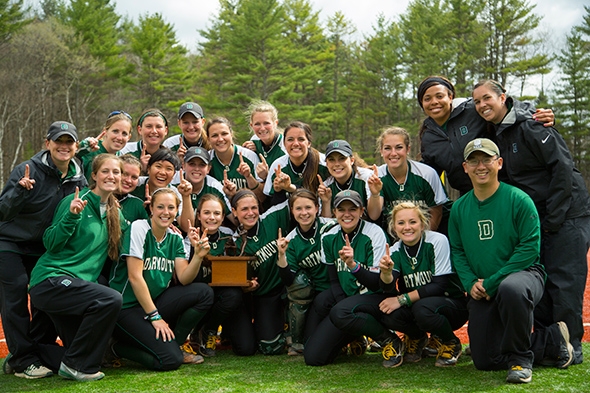 The Dartmouth softball team celebrates winning the Ivy League Championship on May 4. (Photo by Mark Washburn)

Periods of rain and high winds didn’t drive away the crowd, which came alive with the Big Green late in the contest, as Dartmouth scored twice in the fifth inning on a two-run homerun by Kara Curosh ’14. In the sixth inning, the Big Green scored five more runs to take the lead. Dartmouth held the Quakers scoreless over the final three innings of the game en route to the 7-3 victory.

Pitcher Kristen Rumley ’15 picked up her 18th win of the season on the mound for the Big Green, throwing a complete game while allowing three runs on five hits with eight strikeouts. The Katy, Texas, native was also responsible for the game-winning RBI double in the sixth.

“We will enjoy this for a day,” said Head Coach Rachel Hanson. “We want to get back out on the field and be a better team for the NCAA Tournament. We are excited for the opportunity and are ready to play wherever.”

On May 11, the NCAA will announce the 64-team field for this year’s Division I Softball Championship. Regionals will be held May 16 through 18 at 16 campus sites. At each site, a four-team, double-elimination tournament will be conducted, with the 16 winning teams advancing to the Super Regionals.