Spreading Sunshine and Love in China

Read the full story by Susan Green, published in the Winter 2014 issue of Dartmouth Medicine.

Mengyi Zha, Geisel ’16, wants all of China’s 1.3 billion residents to get the basic health services they need.

“Growing up in Beijing, I was aware of the large number of poor and homeless people living in the streets but was taught to ignore them,” Zha recalls. “I felt it was my responsibility to speak for the voiceless and advocate for the ignored, but it wasn’t encouraged.” 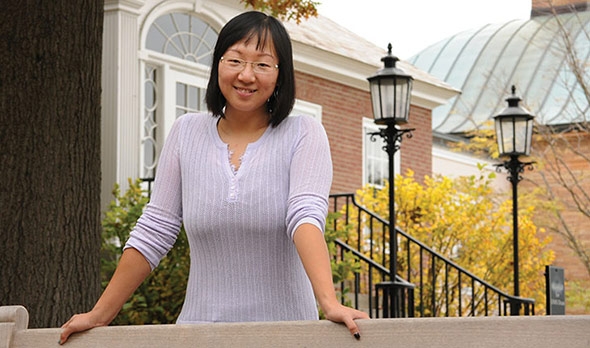 Mengyi Zha, Geisel ’16, is determined to make health care accessible for all residents of China. (Photo by John Gilbert Fox)

Receiving medical care in China can be fraught with difficulties. With few primary-care physicians in the country, getting care requires traveling to the nearest hospital—most doctors are hospital-based—and standing in line waiting to spend a few minutes with an impersonal physician. Faced with these obstacles, people often triage themselves, gathering advice from friends and family before deciding to see a physician. But for the poor and uninsured, paying for health care may not be possible.

As a premed student at Peking University, Zha found this exclusionary system troubling. She wanted to do something about it but wasn’t sure what would help. She left Beijing to complete a mathematics degree at the University of Nebraska, and it was there that she first learned about student-run free clinics. Fascinated by the concept, she thought this model could be emulated in China as a way of introducing compassion-based medicine and service projects to medical students who were unfamiliar with the concepts of social responsibility and volunteerism.

Inspired, she proposed the project to former colleagues at Peking University, and they discussed the feasibility of creating a free clinic. She knew that deconstructing the traditional Chinese model of care was a risky idea because physician-patient animosity is a longstanding problem. “Patients don’t trust doctors, so why would they trust medical students,” Zha says.

Convincing the government, the medical community, and administrators and faculty at Peking University’s medical school that the clinic was viable would not be easy. But undaunted by the task, Zha and a small team of volunteers spent a year visiting student-run clinics in the U.S. and negotiating with Chinese bureaucrats and university officials. Their efforts were rewarded—in 2010 the Sunshine and Love Clinic opened with six volunteers, including Zha. Today, nearly 450 student volunteers staff and manage the campus-based clinic, which provides a bridge to care with physical exams, diagnosis of minor ailments, and health profiles for Beijing’s vulnerable poor and their families.

Zha’s determination to help those less fortunate has gained the attention of medical students throughout China. She coordinated and helped host a national medical student forum in Beijing to teach others what she’s learned, and she has led sessions on volunteerism and social responsibility.

“Geisel has been really supportive of my efforts,” she says. “For the past year, I’ve been able to take time off from my studies to organize and bring medical students from China to the U.S. to attend the annual Society of Student-Run Free Clinics conference.”