The November U.S. Senate race in New Hampshire is a close matchup between incumbent Sen. Jeanne Shaheen, a Democrat, and former U.S. Sen. Scott Brown (R-Mass.), according to a new poll by The Nelson A. Rockefeller Center for Public Policy and the Social Sciences.

Also, President Barack Obama's job approval rating in New Hampshire fell to 36 percent from 45 percent a year ago. And in a mock 2016 race for Obama's job, former Secretary of State Hillary Clinton, a Democrat, trailed U.S. Sen. Rand Paul (R-Ky.) among registered voters, according to the seventh annual State of the State Poll, conducted and written by undergraduates working in Rockefeller Center's Policy Research Shop.

Forty students were involved in the poll, including 16 from the “Polling and Public Policy” class taught by Associate Professor Deborah Brooks. Students conducted the phone survey of a sample pool of 412 registered New Hampshire voters from April 21 to April 25. The annual poll is led by Ronald Shaiko, senior fellow and associate director of curricular programs at the Rockefeller Center, and Visiting Assistant Professor Matthew Cravens.

The State of the State Poll, released May 9, 2014, found that Shaheen's favorability rating fell to 34.1 percent from 46 percent last year. When Shaheen was matched with potential Republican challengers, she polled at 39.2 percent versus 35.6 percent for Brown, and she was favored by 38.2 percent in a race against former U.S. Sen. Bob Smith  (R-N.H.), who polled at 32.4 percent. These results are within the survey's 4.8 percent margin of error. 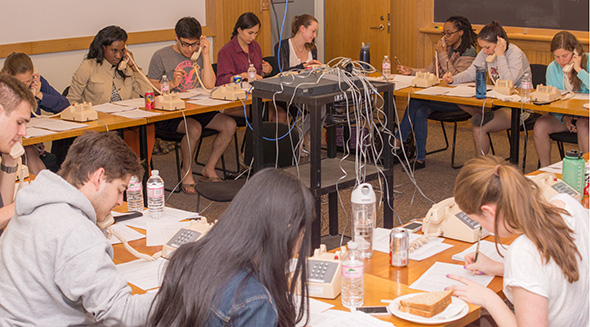 Other poll results show that 35.8 percent of respondents approved of the Affordable Care Act, while 54.2 percent disapproved. This finding splits sharply along partisan lines, with 70.9 percent of Democrats in favor of Obamacare, compared with only 3.4 percent of Republicans backing the health care overhaul.

Other issues in the report include the finding that 61.7 percent of voters approve of a constitutional amendment to prohibit discrimination based on sexual orientation compared with 17.8 percent who disapprove. Half of the polled New Hampshire voters support decriminalizing marijuana in the state, down from 55 percent last year. Almost three-quarters of all respondents support requiring photo identification to vote in New Hampshire, including a 57.9 percent approval rate by Democrats and a 92.2 percent approval rate by Republicans.

The annual poll gets a lot of attention from regional and national media, particularly during the two years heading into the New Hampshire presidential primary. The Policy Research Shop, which does projects for state legislatures, and county and municipal government, works extensively with polling and statistical analysis. The annual survey is another way for undergraduates to experience learning in the field.

"Students have great opportunities to analyze poll results in their classes," says Cravens. "But actually making calls to registered voters in the State of the State Poll puts those results in a much fuller context. Whether they hear people's top-of-the-head responses or deliberate over policy issues, talking to respondents provides some real intuition about the strengths and weaknesses of telephone polling."

Chelsea Lim '16 says the survey work was a wonderful opportunity. "It was such a formative learning experience, and I really enjoyed seeing the polling process from start to finish. I have definitely come out of the Rocky Poll with a greater understanding of survey research, weighing data results, and conducting telephone interviews."