Read the full story by Andy Sarroff, published by The Graduate Forum.

Graduate students in the Digital Musics Program recently traveled to Cologne, Germany, to install their new sound installation, Singer. The installation was chosen by a jury to be exhibited in a public space as part of the 2014 Eight Bridges: Music for Cologne festival. 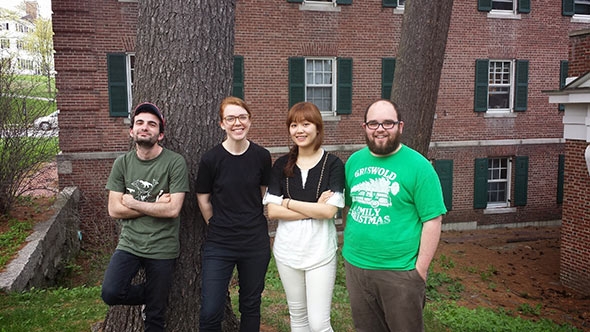 Shannon Werle, Carlos Dominguez, Ezra Teboul, and Angela Kim—the artistic designers of Singer—won second prize in the Composition Competition for Young Composers. The competition asked for works that examine the clash between mechanical rhythm and human pulse within the context of the industrial production line invented 100 years ago. Singer is a set of conveyor belts with glass objects attached to its surfaces. As the motors turn the conveyor belts, the attached objects strike tuned metal resonators and roll across the ground, producing melodic, percussive, and rasping sounds.

“The project was initially based on an image that we saw of the [installation] site … and was inspired by the Industrial Revolution,” says Werle. The coarse mechanical structure and rhythmic regularity of acoustic events elicit the automation of the manufacturing assembly line. The installation’s interplay with the gravel terrain forces spectators to be aware of the physical site. Viewers described the piece as meditative and made comparisons to Japanese artist Motoi Yamamoto’s large-scale sand installation Labyrinth (2010), which through its large footprint and choice of materials also commands an awareness of its location.

We know that heat waves kill crops and cause illnesses like heat stroke, but they also have other effects such as increased interpersonal aggression (and) increased rates of workplace injury.