What date most changed the course of history? Professors from various disciplines weigh in.

June 13, 622Kevin Reinhart, religion This is the date of Muhammad’s hijra to Medina. From that date, we see the establishment of the Muslim polity, the securing of Islam as a religion, and the growth of Islamdom to include 1.5 billion people and much of the world. 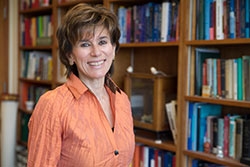 Jane Lipson, the Albert W. Smith Professor of Chemistry, cites June 23, 1847, as a day that changed the course of history.  (Photo by Eli Burakian ’00)

July 16, 1945Lee Witters, Geisel School of Medicine Trinity. With the explosion of the first nuclear device, humankind had learned how to eliminate what the Big Bang, the first synthesis of the molecules of life, and natural selection by evolution had created on our small planet. As Robert Oppenheimer said, referring to the Bhagavad-Gita, “Now I am become Death, the destroyer of worlds.”

November 17, 1095Cecilia Gaposchkin, history I would argue for the day on which Pope Urban II preached the First Crusade. This launched hundreds of years of warfare between the Christian West and Muslims in the Middle East, played a pivotal role in the construction of Europe and its cultural and religious identity, and established the conditions for the ideological conflict between a Christian West and an Islamic Middle East, the legacies of which shape much of today’s geopolitics.

June 23, 1847Jane Lipson, chemistry On this date, during a meeting of the British Association for the Advancement of Science, William Thompson (later Lord Kelvin) highlighted James Joule’s meticulous experiments, quantifying beyond dispute the equivalence of energy transferred as heat and energy transformed into mechanical work. Thompson pointed out that Joule’s results were the definitive answer to questions about the nature of energy and its transformations; their work led directly to the Second Law of Thermodynamics. The Laws have profound implications, first felt during the Industrial Revolution and destined to accompany us forever as we strive to adapt this universe to our needs and desires.