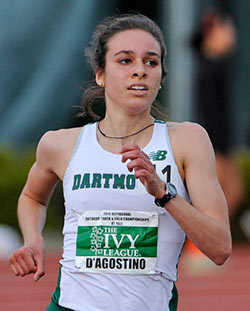 Abbey D’Agostino ’14 was named Most Outstanding Female Track Athlete of the Meet for the third straight year at the Ivy League Heptagonal Championships. (Photo by Tim O’Dowd)

It came down to the wire for the Dartmouth women’s track and field team Sunday afternoon at the 2014 Ivy League Outdoor Heptagonal Championship hosted by Yale. Six individuals and one relay team claimed event titles for the Big Green, but in the end it was Harvard winning its first team championship since 1990, edging out second-place Dartmouth, 162 to 149. The finish was the best by the Big Green women since the team took second in 2000.

Several historic accomplishments were set by members of the Green during the competition at Yale’s Cuyler Field & Dwyer Track. Abbey D’Agostino ’14 won both the 5,000 and 3,000 meters. She now stands alone as the only woman ever to win the 3,000 meters three times at the Ivy’s outdoor championship meet. Her historic weekend also included a win in the 10,000 meters, making her the first woman in conference history to win the 3K, 5K and 10K in a career, let alone in a single weekend. She was named the Most Outstanding Female Track Athlete of the Meet for the third straight year. Over her four-year career, D’Agostino has 16 career Ancient Eight championships to her credit, including titles in cross country and indoor and outdoor track and field.

Kaitlin Whitehorn ’16 became the first woman in Ivy League history to win both the high jump and the 100 meters. (Photo by Tim O’Dowd)

It wasn’t just D’Agostino who set new records for Dartmouth this weekend. Kaitlin Whitehorn ’16 became the first woman in Ivy League history to win both the 100-meter and the high jump in a career, a feat she accomplished in little more than an hour apart on Sunday. Whitehorn went through the high jump field with ease, clearing all five heights on her first attempt. After winning the high jump, she lined up on the starting blocks and won the 100 meters in 11.74.

The Dartmouth men’s track and field team finished fifth at the championships. On Saturday, Josh Cyphers ’14 became the first Dartmouth man to win the pole vault since 1955. On Sunday, Steve Mangan ’14 won the 1500-meter in 3:46.23.