Baccalaureate 2014: ‘One Light, Many Candles’

Led by Stefan Deutch ’14 waving a colorful kite and by the Rev. Subdeacon Paul Feeney, Eastern Orthodox chaplain emeritus, members of Dartmouth’s United Campus Ministers processed into Rollins Chapel for Saturday’s Baccalaureate service. Together with the Dartmouth College Gospel Choir, they joined the members of the Class of 2014 and their families and friends, who filled the chapel for a celebration of love, peace, and thanksgiving, framed in words and songs drawn from the many religious traditions represented at Dartmouth. 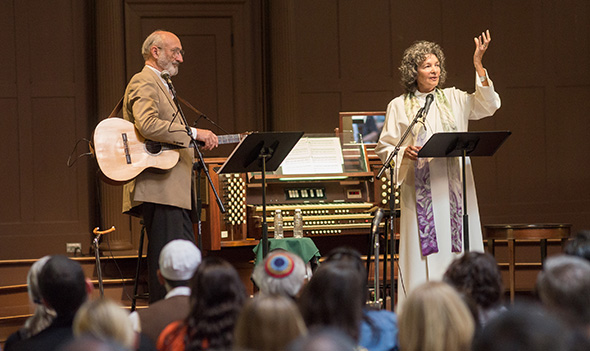 In their presentation, the Rev. Elizabeth Stookey and Noel Paul Stookey challenged the assembly to think about the values shared by the world’s major religious traditions. (Photo by Eli Burakian ’00)

“One Light, Many Candles,” a presentation by the Rev. Elizabeth Stookey and Noel Paul Stookey was the centerpiece of the service. The Rev. Stookey, an ordained United Church of Christ minister and former school chaplain, shared the podium with her husband singer-songwriter Noel Paul Stookey, who first came to prominence in the 1960s as a member of the folk group Peter, Paul and Mary.

Along with student readers who offered passages from Native American, Jewish, Muslim, Buddhist, and Christian spiritual traditions, the Stookeys’ program challenged the assembly to think broadly and deeply about the values shared by the world’s major religious traditions, including peace and love. Paul Stookey invited the gathered group to sing along at times, and—enlivened by a breeze blowing through the chapel’s open doors—they did.

As the Rev. Nancy Vogele’ 85, director of the Tucker Foundation’s Office of Religious and Spiritual Life, noted in her introduction and welcome, Dartmouth’s Baccalaureate—a multifaith, multicultural service—has evolved significantly from its origins in medieval Oxford, and even in the time since Dartmouth’s founding by the Rev. Eleazar Wheelock. “We celebrate the variety of religious and spiritual traditions that are now represented at Dartmouth,” she said. “We celebrate what we hold in common while also recognizing each tradition’s beautiful particularities.”

Kapi ‘olani Alyce Laronal, director of Dartmouth’s Native American Program, sang an invocation at the start of the service. The parents’ address was given by Rama Jayanti, mother of Anirudh Jayati ’14, who praised the role the Tucker Foundation and the Hindu group Shanti both play in building community at Dartmouth. The Gospel Choir performed its signature arrangements of America and September, and Ryan Bouton ’01, campus minister for Cru, gave a benediction.

Vogle offered good wishes to the Class of 2014: “God bless all of you who are graduating, and to your families and friends who have supported you. We celebrate with you and we pray that you may be a blessing to the world.”