Chemistry on Stage: VoxFest Is a ‘Creative Laboratory’

There’s one laboratory at Dartmouth this summer that won’t contain any scientists or chemical reagents. Instead, actors, directors, and playwrights will concoct artistic chemistry in campus performance spaces during VoxFest, a weeklong theater residency that brings together Dartmouth alumni, students, and faculty to create and present works-in-progress. 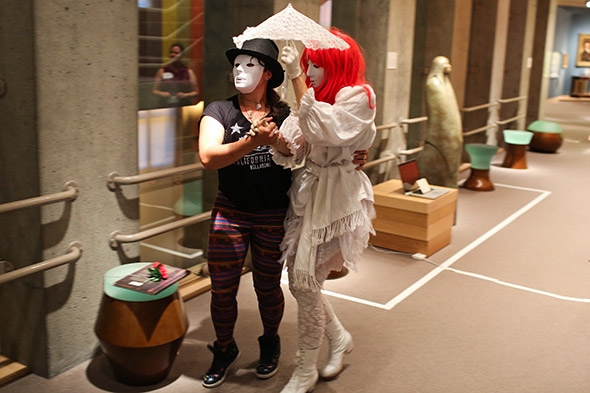 A festival for the development of innovative new projects initiated by Dartmouth alumni, Vox Theater will be in residence at Dartmouth through July 6. (Photo courtesy of the Hopkins Center for the Arts)

“We call it a creative laboratory,” says Kate Mulley ’05, a New York-based playwright and co-founder of Vox Theater, which produces VoxFest. “It’s a way for artists to come to Hanover and work on pieces they wouldn’t [otherwise] have the space or time to work on.” She describes this year’s productions as “a lot of really smart, thought-provoking plays that explore different issues in the world and society.” It’s the second year for the VoxFest collaboration.

This year, about 20 Dartmouth alumni will take part. The organizers’ goal was to present a diverse array of projects. “We wanted to bring up people who are exploring what theater is in lots of different ways,” explains Mulley. The productions will range from a musical to a show that will be created from start to finish during the weeklong residency. This year’s VoxFest runs through July 6 and will culminate in the presentation of six innovative productions.

Last year, says Mulley, “we got a lot of really great work done—one of the plays was presented in Chicago a month later.”

What the organizers “didn’t fully grasp” until the conclusion of last year’s inaugural VoxFest, says Mulley, “was how exciting it was going to be for the students. The only theater class offered on campus during the summer is a “Drama in Performance” class, and participation in VoxFest is part of the curriculum for the term. The students had a wonderful time understanding what it’s like to be in a professional play, with a professional director and professional actors.”

VoxFest is organized by the Department of Theater and supported by the Office of Alumni Relations, Vox Theater, the Monahon Family Fund and other donors.

There are four ticketed and two free productions this year; for ticket details and more information on the shows, visit the theater department website.