For the third straight year, Dartmouth’s Abbey D’Agostino ’14 has been named the U.S. Track & Field and Cross Country Coaches Association Northeast Region Women’s Track Athlete of the Year, the organization announced on June 9. 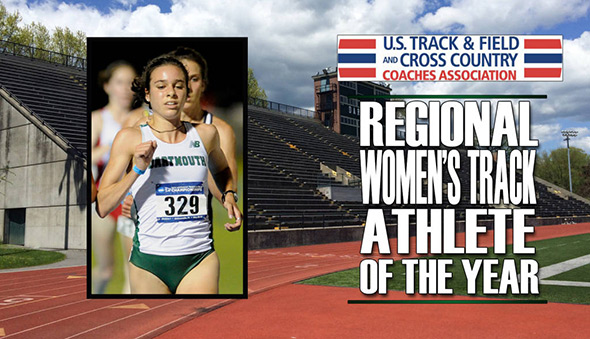 Abbey D’Agostino ’14 was named the U.S. Track & Field and Cross Country Coaches Association Northeast Region Women’s Track Athlete of the Year for the third year in a row. (Courtesy of Dartmouth Athletics)

Dartmouth will host a viewing party for Abbey D’Agostino’s final race. The event, which is free and open to the public, begins at 5:30 p.m. on June 14 in Memorial Stadium.

Follow Abbey on social media by using the #RunWithAbbey hashtag.

This spring, D’Agostino added to her already impressive resume by winning three more Ivy League championships (3000 meters, 5000 meters, and 10,000 meters) in May. By winning all three distance races, she accomplished in one weekend what no other Ivy League female had ever done in an entire career.

Just over a week ago, the Topsfield, Mass., native placed second in a field of 48 and won her 5000-meter heat at the 2014 NCAA East Regional, securing a berth at this week’s NCAA Division I Women’s Outdoor Track and Field Championships in Eugene, Ore., where D’Agostino will seek her eighth career national title.