A Dartmouth Legend Looks to Her Final College Race

On June 14, one of the most decorated female distance runners in NCAA history will put on her Dartmouth uniform one last time.

Prior to heading to Eugene, Ore., for the NCAA Division I Women’s Outdoor Track and Field Championships, Abbey D’Agostino ’14 helped lead her classmates onto the Green during Commencement as a Senior Class Marshal, carrying the American Flag. (Photos by Tim O’Dowd and Eli Burakian ’00)

So where do her many accomplishments place D’Agostino beyond Dartmouth and the Ivy League? To her coach, assistant track and field coach Mark Coogan, the answer is easy. “Abbey to me is the greatest NCAA female athlete the Ivy League has ever produced,” says Coogan. “She is going down as one of the all-time great college athletes, period.”

And that’s not just a coach’s bias talking.

“Abbey will always be known as one of the top athletes in NCAA history,” says three-time Olympian Suzy Favor Hamilton, who ran for the University of Wisconsin in the late ’80s and early ’90s and is the NCAA record co-holder for individual national titles, with nine.

D’Agostino’s list of accomplishments speaks for itself: She was the first Ivy League runner (male or female) to win a cross country national title; she has won more national titles than any other female Ivy League athlete in history; and she is the only woman ever to win both the 3000- and 5000-meter indoor national championships twice in a career.

She will be competing in the 5000-meter race in Eugene, marking the end of an unprecedented collegiate career for the woman who arrived in Hanover as a lightly recruited runner out of Topsfield, Mass. It’s a ride that has taken D’Agostino not only to the pinnacle of college sports, but also to the doorstep of the Olympics.

D’Agostino isn’t sure how she’ll feel when she suits up for the last time in her college career. 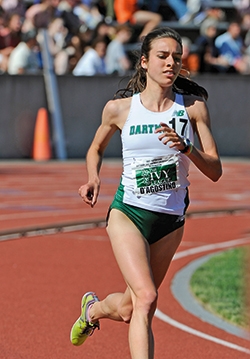 “Much of my racing motivation has been the opportunity to represent Dartmouth and the incredible team behind me,” says Abbey D’Agostino ’14. (Photo by Tim O’Dowd)

“Definite nostalgia, and also a profound sense of gratefulness. Much of my racing motivation has been the opportunity to represent Dartmouth and the incredible team behind me,” she says. “That appreciation will drive me.”

And while her uniform will change after this final collegiate race, the bright trademark smile that D’Agostino constantly wears likely will not.

“Abbey is a wonder of a woman whose smile and humble demeanor is disarming and unique,” says former Dartmouth teammate Alexi Pappas ’12, an All-American runner in her own right.

Representing the University of Oregon as a graduate student, Pappas competed against D’Agostino in the 3000-meter and 5000-meter finals of the 2013 NCAA Indoor Championships.

“Even though we wore different uniforms, it didn’t feel like I was running against Abbey, so much as running with her,” says Pappas. “I couldn’t help but cheer Abbey on as my teammate and best friend.”

Pappas had plenty to cheer about: D’Agostino won both races by more than 10 seconds combined.

It was just a year earlier that Pappas and D’Agostino represented Dartmouth at the 2012 U.S. Olympic Trials. After she won the first heat, D’Agostino’s green and white singlet looked a bit out of place among her mostly professional counterparts in the final qualifying race. But that day, she proved she belonged there.

The then-20-year-old finished less than two-tenths of a second off the qualifying mark for the London games. Wearing the word “Dartmouth” across her chest, D’Agostino passed many of her older competitors in uniforms bearing the logos of sponsors such as Nike, New Balance, and Asics—companies undoubtedly jockeying to sponsor D’Agostino once she becomes eligible to turn pro. Her coach Mark Coogan leaves Dartmouth at the end of the season to focus on his work with New Balance.

While D’Agostino has played her cards close to the vest regarding her post-graduation plans, it’s clear that, as always, she wants the focus to be on the team and not on her.

“I’m not going to settle for anything less than what I know I want, and that’s to be a part of a team,” D’Agostino told the running website LetsRun.com this past fall. “So I’m going to try to find that in the professional world, too. That’s my biggest thing.”

“I can honestly say that if she were at, pick a school—Stanford, Georgetown or whatever—I don’t know you could necessarily say, slam dunk, that you would have gotten the same results,“ Eric D’Agostino, Abbey’s father, told ESPN this spring. ”Because I think the environment she’s in and the support of teammates, the atmosphere at Dartmouth, have been a huge part of it.

It’s no wonder that D’Agostino’s popularity exploded during her four years in Hanover. With her brown hair pulled back in a ponytail, she became a frequent sight as she ran along the streets and up and down the hills of Hanover. Her celebrity in the Dartmouth community clearly springs not only from her successes as an athlete, but also from her reputation as an intelligent, personable, and down-to-earth friend.

“To those around her, she’s radiant,” says Pappas.

When she wasn’t winning on the track or trails, D’Agostino was excelling in the classroom. In February, she was named the U.S. Track and Field and Cross Country Coaches Association Division I Women’s National Scholar Athlete of the Year—for the fifth time.

“It amazes me that she has done so well while also being super-focused on academics. I don’t know many people who can combine both like she does,” Coogan says. “It is too difficult for most student-athletes in the Ivy League to do both athletics and academics at an All-American level.”

Dartmouth’s Director of Athletics Harry Sheehy says he is looking forward to D’Agostino’s final race for the Big Green.

“Abbey is everything we hope our student-athletes embody when they put on a Dartmouth uniform—excellence, character, and class,” says Sheehy.

Dartmouth will host a viewing party for D’Agostino’s final race. The event, which is free and open to the public, begins at 5:30 p.m. on June 14 in Memorial Stadium. Follow Abbey on social media by using the #RunWithAbbey hashtag.