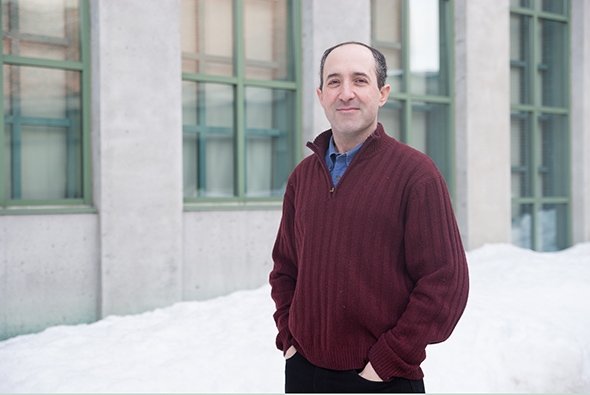 “A number of people are working in this area and most of them trace the work to 2000. That’s when almost everything started,” says Professor Michael Herron. (Photo by Eli Burakian ’00)

The draft study, coauthored with Daniel Smith, a University of Florida political science professor, comes as the national debate over restrictive election laws and voter ID requirements intensifies. Some 30 states have enacted ID provisions. Many of these new laws are being challenged in state or federal court.

Partisan fights over ballot formats, voter ID, registration requirements and other polling rules are familiar to most Americans today, but they were unheard of 15 years ago, says Herron. He is among the wave of researchers gathering data on these questions in a rapidly expanding field called “election administration.”

Although the term “election administration” may not sound particularly dynamic, this is a rapidly expanding field exploring issues at the root of American democracy.

“We are dealing with very fundamental issues that speak to the fairness of the electoral system,” Herron says.

He was one of six scholars who used statistical analysis to argue that the butterfly ballot used in Palm Beach County, Florida, caused more than 2,000 Democrats to vote by mistake for candidate Pat Buchanan in the 2000 presidential election, a number greater than George W. Bush’s margin of victory in the state.

“Al Gore would have won. That’s what it showed,” Herron says of the paper, published in December 2001 in American Political Science Review. The U.S. Supreme Court halted the Florida recount, giving Bush the victory in Florida, which decided the presidential election.

“A number of people are working in this area and most of them trace the work to 2000. That’s when almost everything started,” Herron says. “This was the first time that political scientists for the most part really had thought about things like ballot formats and whether the distribution of voting technology was fair, and what it does.”

Herron has continued his work since 2000, publishing widely in the field of election administration, including papers on voting technology and the 2008 New Hampshire primary; ballot formats and touchscreens in the 2006 midterm elections in Florida; and wait times and turnout in the 2004 election in Ohio.

Herron and Smith examined millions of publically available voter records from North Carolina and concluded that changes in the new law, including elimination of one week of early voting, requiring two forms of identification to cast a ballot, and elimination of “one stop” registration and early voting, will each impact black citizens at a significantly higher percentage compared with white voters.

While the authors draw no conclusions about the intent of the North Carolina law, the U.S. Attorney General did. A suit filed by the U.S. Department of Justice in October seeks to invalidate the measure, alleging the law was enacted “with the purpose of denying or abridging the right of African Americans to vote on account of their race or color.”

Herron says he and other political scientists working in this field avoid being drawn into the political debate about intent.

“The research that I am working on and others are working on—we’re trying to think about this from a social sciences point of view. Let the politicians interpret that as they want,” he says. “For example, in the North Carolina paper, we go out of our way to emphasize that we don’t discuss whether it is a Democratic or Republican issue. Now those are interesting questions, but that’s not the point of this paper.”

But the data in North Carolina are clear, he says. “The law is uniformly disadvantageous to blacks.”

The statistical analysis by Herron and others is pointed to in many legal challenges. The Justice Department has filed a civil rights suit opposing restrictive ballot rules in Texas. State and federal judges have blocked new voter identification laws in Pennsylvania and Wisconsin, and upheld similar measures in Kansas and Arizona.

As the debate intensifies across the country, Herron and others in the field are digging into precinct level details from elections all over the country.

“My work is really applied statistics and I want to stick to the data,” Herron says.