For 52 years, a professional brass quintet has been hired to play the solemn marches and ceremonial music for the Dartmouth Commencement each spring. At this year’s ceremony on Sunday, June 8, however, the customary quintet will be replaced by student musicians, some in caps and gowns, who will play the processional, recessional, and incidental music, about 90 minutes in all. 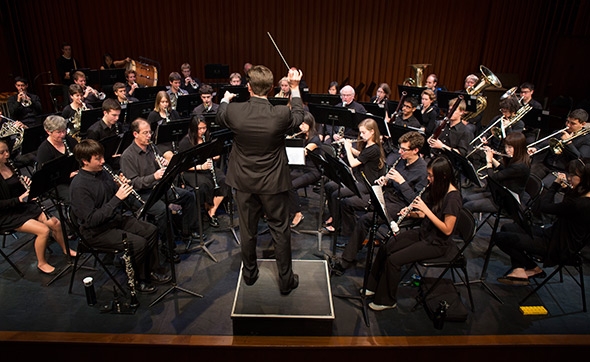 The Dartmouth College Wind Ensemble, under the direction of Matthew Marsit, will perform the processional, recessional, and incidental music for Commencement 2014. (Photo by Robert C. Strong II ’04)

The 24 musicians are from the Dartmouth College Wind Ensemble, under the direction of Matthew Marsit, and include graduating students Jeremy Baskin ’13, Th ’14; Mitchell Jacobs ’14; and Ryan McWilliams ’14. The three will be seated to play alongside their colleagues and will rise to collect their diplomas.

Commencement has long featured the Dartmouth College Glee Club, singing Dartmouth’s traditional songs. Last fall, the wind ensemble played as part of the fall Convocation, which opens the academic year. It served as an audition for Commencement, which the group passed, Marsit says.

All 24 musicians will play for most selections, while a smaller, brass-only contingent will play certain pieces, as stipulated by tradition, Marsit says. As for what they will play, Elgar’s Pomp and Circumstance will be heard, Marsit says, “but not on an endless loop.” It will be varied by other march music, mostly by English composers, whose marches tend to be at stately andante tempos.