President Phil Hanlon ’77 announced today that Dean Wiley “Chip” Souba would not seek reappointment to a second four-year term as dean of the Geisel School of Medicine.

As a member of the faculty of the medical school, Souba will focus his work on expanding nationally his interests in the future of medical education to prepare students to be leaders and advance health care. 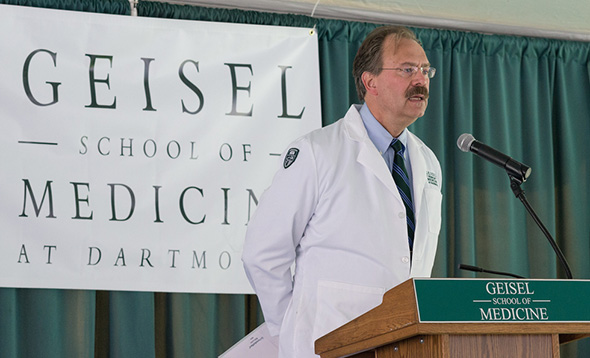 As a Geisel faculty member, Wiley “Chip” Souba will focus on expanding the future of medical education. (Photo by Eli Burakian ’00)

President Hanlon noted that Souba has had a significant impact on education, research, and health care delivery at Geisel since arriving in September 2010.

“He expertly guided the school through an extensive accreditation process, securing a full eight-year term—the longest available from the Liaison Committee for Medical Education. He has led the effort to create an innovative curriculum that will ensure that our students receive a contemporary 21st century medical education,” Hanlon said.

Under Souba’s leadership, Geisel’s stature as a medical school increased and it moved into the top 20 medical schools nationally for primary care, climbing 13 spots to 18th in the 2015 U.S. News & World Report’s Best Medical Schools rankings. During his tenure, more and more top prospective students have become interested in pursuing their medical education at Dartmouth. Geisel experienced a 22 percent surge in applications to the 2014 entering MD class, an increase projected to be more than triple the national average.

Geisel made strides in biomedical and population health research under Souba’s leadership, Hanlon said. Among them: The medical school was awarded $18 million in the National Institutes of Health’s Clinical and Translational Science Award (CTSA) program, joining an elite number of research universities nationally. Also, he continued, Geisel’s Williamson Translational Research Building construction continues, and the work conducted there will improve the health of communities and individuals.

“Chip’s unwavering commitment to our students has helped several Geisel graduates rise to become national leaders in academic medicine and global health. He responded to growing student need for structured experiential learning opportunities in underserved areas by establishing the Center for Health Equity in 2013.