In honor of their commissioning as U.S. Marine Corps officers, graduating seniors Zachary Moskow ’14 and Evan Bloom ’14 were presented copies of Dartmouth at War on May 29. The book, published by the Class of 1942 in December 2011, gathers memoirs, photos, and maps from more than 100 members of the class who served in World War II. The presentations were made by Huntly Allison ’42 and his wife, Ginia Allison, both of whom contributed essays to the volume. 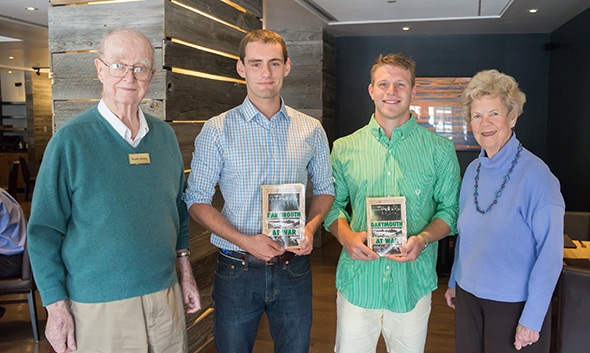 At the presentation on May 29 are, from left, Huntly Allison ’42, Ginia Allison, and USMC Officer Candidates Zachary Moskow ’14 and Evan Bloom ’14. (Photo by Eli Burakian ’00)

In addition to the marines, Morgan Sutherland ’14 will commission in the U.S. Army after summer training. At Pinkerton Academy in Derry, N.H., he was the highest-ranked officer in his Junior Reserve Officer Training Corps (ROTC) unit, and served as the group commander for its 150 cadets. He received both the Air Force Association Award and the Instructors’ Leadership Award for his service. 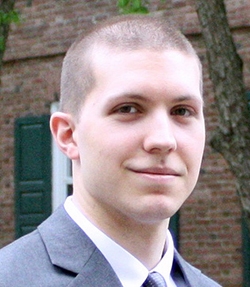 Morgan Sutherland will be commissioned as a second lieutenant in the U.S. Army. (Photo courtesy of The Nelson A. Rockefeller Center for Public Policy)

At Dartmouth, Sutherland double majored in history and government with a minor in economics, and received an academic citation for his work in Chinese history. After graduation, Sutherland has his sights set on a commission as a second lieutenant in the intelligence branch, and then on to graduate school.

“Dartmouth Army ROTC is growing, and we expect to be commissioning four, six, and eight students respectively over each of the next three years,” says Capt. Gregory Wortman, director of Dartmouth’s ROTC program.

Evan Bloom ’14, an award-winning Big Green lacrosse player, was recruited to Dartmouth to participate in the sport. At Sachem North High School in Lake Ronkonkoma on Long Island, N.Y., he played both lacrosse and football. “I played four years of varsity lacrosse here, two years of varsity football,” he says. “l walked on to the team my junior year to fulfill a dream of playing college football.”

A history major with minors in English and psychology, Bloom almost passed up Dartmouth for the U.S. Naval Academy but chose the College and applied to USMC Officer Candidates School his first fall. The following summer, he attended Officer Candidate School (OCS) at Quantico, Va. “I wanted a job that was physically and mentally challenging that I knew was absolutely worth doing. The military seemed like an obvious choice,” he says.

Bloom receives his Marine Corps commission during a ceremony aboard the U.S.S. Constitution in Boston, “where I will swear to uphold and defend the Constitution and pin on the rank of a second lieutenant,” he says.

He goes on active duty September 2, with basic training and then flight school, with the goal of flying either fighter jets or casualty evacuation helicopters.

At Dartmouth, Bloom acted as master of ceremonies at the Special Olympics all four years. “Serving in the capacity gave me some of my most rewarding experiences,” he says.

Zachary Moskow ’14, also a soon-to-be commissioned marine, grew up in the Greater Boston area. He learned to appreciate art at an early age, as his father is an architect and his mother has worked in arts administration. Moskow attended the Cambridge School of Weston, where he took courses in photography and sculpture.

“I was greatly influenced by my uncle, Ken Moskow, who served with the CIA and who talked highly of public service and of the Marine Corps,” says Moskow. During his first-year summer, he attend Marine Corps Officer Candidate School (OCS), where he completed Platoon Leaders Class (PLC) Juniors course. PLC is one of the courses offered at OCS and consists of two six-week training cycles that usually take place during the summer after one’s first year (or sophomore) and junior years.

At Dartmouth, Moskow first considered a history major but found he was more drawn to the studio; he is graduating as a studio art major with an emphasis on photography and architecture. In addition to his studies, Moskow played rugby, was an exchange student at the University of Sydney, and was an active member in Phi Delta Alpha as a house manager. In his off-term junior winter, he was certified as a Wilderness EMT.

Upon graduation Moskow plans this summer to complete the last segment of Marine Corps Officer Candidate School, Platoon Leaders Class Seniors, and commission as a second lieutenant with an aviation contract.