This story was originally published in the Dartmouth College Fund’s spring 2014 issue of “From the GREEN.” 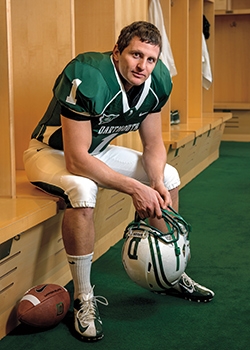 “Walking on to the team was challenging. I felt way out of my league. But the coaches were all extremely helpful, and they encouraged me to keep going,” says Kevin Price ’14. (Photo by RL Photo Studio)

Kevin Price ’14, a history major from New Orleans, La., is a 31-year-old, married father of two who served for six years as an Army Ranger, deployed to both Iraq and Afghanistan. He also owned a restaurant, and returned to Afghanistan as a private contractor before becoming a Dartmouth student. Last fall, Kevin fulfilled a lifelong goal to play college football by successfully walking on to the Dartmouth football team.

From the GREEN spoke with Price about his Dartmouth experience:

I’ve wanted to play football ever since I was a little kid. There’s a video of me when I was 5 or 6 years old, running around with a football helmet on all day—I wouldn’t take it off. When I was applying to Dartmouth I remember saying to my wife, “If we get in, I’m going to walk on to the football team.” For the first two years I focused on my courses, but I talked to her about it last year and said, “Well, this is the last year I have. Would it be fine if I walk on the team?” She was supportive, so I decided to go for it.

Walking on to the team was challenging. I felt way out of my league. But the coaches were all extremely helpful, and they encouraged me to keep going. There was a little bit of an age barrier between most of the players and me since I am about 10 years older than they are, but they were also supportive. I think the younger players looked at me as a role model, so I tried to lead by example by making sure I was always focused and always early to daily workouts or meetings.

Dartmouth is challenging to someone like me because when you’re out of school for so long you almost lose the way to learn—it’s like your brain just doesn’t function that way anymore. My first term here, I’d come to school on the bus at eight o’clock in the morning and then go home for dinner, come back, and then I’d stay in the library until 10 o’clock every night. It was seven days a week of studying all day long. After three years of being here, I feel like I’m starting to overcome it—to learn how to learn again. My will, my desire to learn now is much stronger than it’s ever been. Dartmouth gave me that.