Many of us think of mathematics as mainly about calculation–whether it be the exercises we did in grade school or later day frustrations with our tax returns. But the truth is, mathematics is much more than that. Just ask the people behind Math-O-Vision. 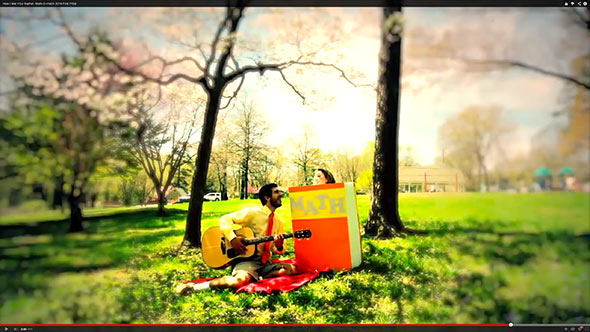 Math-O-Vision 2014 first prize winner “How I Met Your Mather” was submitted by Tim Schauer of Charlottesville, Va.
(Courtesy of Seano Whitecloud)

The program is actually a film contest, now in its second year, co-sponsored by the Institute and the Department of Mathematics. “We have been reaching out to students through social media, inviting them to make original four-minute movies that creatively show how math is in the world all around us,” Whitecloud says. Forty-three videos were submitted this year.

“The goal of Math-O-Vision is to get high school students to have fun with math and show their love of math through the creation of math-themed movies,” says Daniel Rockmore, Neukom Institute director, the William H. Neukom 1964 Distinguished Professor of Computational Science, and the creator of the competition. “This year’s submissions showed a great level of creativity.”

While other programs encourage the development of mathematics educational movies, Math-O-Vision takes a more oblique approach. It is about making entertaining movies that show math to people who had no idea that they might actually like math.

“If you can make a movie in a way that is appealing and creative, showing that math is all around us, then there’s a chance that someone who doesn’t know that they like math might say, ‘It’s actually more cool than I thought it was,’” says Whitecloud.