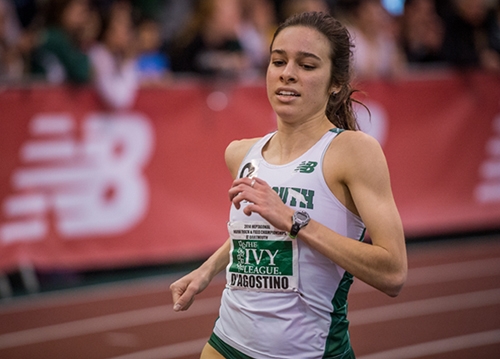 Abbey D’Agostino ’14, one of the most decorated athletes in Ivy League history, finished third in her final race for Dartmouth on Saturday, June 14, in the NCAA Division I Women’s Outdoor Track and Field Championships, in Eugene, Oregon.

D’Agostino Finishes Third in Her Final Collegiate Race I

n a bittersweet finish to an extraordinary college running career, seven-time national champion in track and cross-country Abbey D’Agostino ’14 finished third in the 5,000 meter at the NCAA Outdoor Track & Field championships in Eugene, Ore. Wearing the Dartmouth uniform for the last time, D’Agostino, from Topsfield, Mass., was in a large pack of runners that got out to a slow start for the first mile of the 3.1-mile event.

“Abbey to me is the greatest NCAA female athlete the Ivy League has ever produced,” says Mark Coogan, Dartmouth’s assistant track and field coach. “She is going down as one of the all-time great college athletes, period.”

D’Agostino’s list of accomplishments speaks for itself: She was the first Ivy League runner (male or female) to win a cross country national title; she has won more national titles than any other female Ivy League athlete in history; and she is the only woman ever to win both the 3000- and 5000-meter indoor national championships twice in a career.

Dartmouth Alumni Magazine In the fall of 2010 Abbey D’Agostino ’14 arrived on campus to compete on the cross-country team. Four years and seven national titles later, she’s become one of the most prolific athletes in Dartmouth history.

Abbey D’Agostino is the first woman ever to win the 3000-meter and 5000-meter in the same meet in consecutive years.

Scholar Athlete of the Year Award for D’Agostino

Abbey D’Agostino ’14 has been named the U.S. Track & Field and Cross Country Coaches Association (USTFCCCA) Division I Women’s National Scholar Athlete of the Year for the 2013 cross country season.

The Dartmouth senior is the first Ivy League runner ever to win the NCAA cross country title.

For the second year in a row, D’Agostino won the title in the 5000 meters.

A complete listing of Abbey D’Agostino’s races as a member of Dartmouth’s women’s winter (indoor) and spring track and field teams and the fall women’s cross country team.

D’Agostino in the News:

Faces in the Crowd