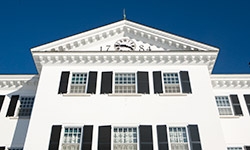 Dartmouth’s revised student disciplinary policy for charges of sexual assault, which requires that an independent investigator look into complaints and provides for mandatory expulsion in some cases of sexual assault, goes into effect June 19, the first day of the summer term.

In a letter to the Dartmouth students Wednesday, Provost Carolyn Dever and Dean of the College Charlotte Johnson, together with President Phil Hanlon ’77, and the deans of the faculties, announced the new policy, calling it an important component of the College’s strategy to address sexual violence and high-risk behavior.

“The policy announced today will provide for the prompt, effective, fair, and impartial investigation and resolution of complaints of sexual assault,” Dever and Johnson said in the announcement.

Robert Donin, general counsel for the College, said similar changes are taking place at institutions across the country.

“Dartmouth is one of a number of colleges and universities that have adopted the single-investigator model in an effort to encourage reporting and streamline the investigation process,” Donin said.

The new policy, which applies to conduct occurring on or after June 19, 2014, establishes a single College-wide process for allegations of sexual assault by undergraduate students and students in any of the graduate and professional schools.

The revisions to the Unified Disciplinary Procedures for Sexual Assault come after months of public comment received by e-mail, through the Improve Dartmouth web site, and in meetings conducted with faculty, student committees, and leadership groups.

Among the revisions based on public input are: adding definitions for “incapacitation” and “intentional incapacitation,” including a tenured or tenure-track faculty member to serve on the sanctioning panel; and authorizing the Provost, rather than the Dean of the College, to designate the official to consider a request for review of a case.

“We received many thoughtful comments on the proposed policy reflecting a wide variety of perspectives,” Donin said.

“As the process now moves from formulation to implementation, we welcome your feedback and suggestions,” Dever and Johnson indicated.

With the announcement, the College posted the new policy on the Dean of the College web page in the space that also houses the student handbook, along with an explanatory memorandum from Donin and Leigh Remy, director of judicial affairs. These documents are also posted to the Dartmouth sexual assault awareness web page.