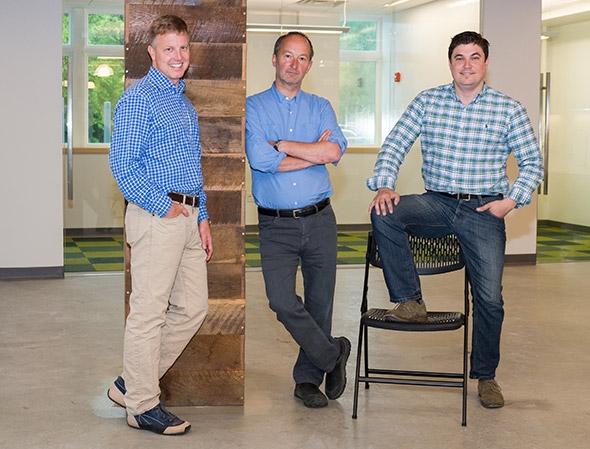 Trip Davis ’90, left, Tillman Gerngross, center, and Jamie Coughlin photographed at the center’s new location in Currier Place. Davis is the executive director of the Office of Entrepreneurship & Technology Transfer; Gerngross, a professor of bioengineering at Thayer school of Engineering, is the associate provost for the Office of Entrepreneurship & Technology Transfer; and Coughlin is the director of New Venture Incubator Programs and the Dartmouth Regional Technology Center. (Photo by Eli Burakian ’00)

“We have moved at warp speed, especially in an academic setting, to get the center open and ready—in a total of nine months,” says Trip Davis ’90, executive director of the Office of Entrepreneurship & Technology Transfer (OETT), which oversees the Dartmouth Entrepreneur Network (DEN) and the new center. “It was a terrific team effort from many groups across Dartmouth, and very entrepreneurial.”

Tillman Gerngross, professor of bioengineering at Thayer School of Engineering and founder of several successful biotech companies, was named associate provost for OETT in April. He calls the new center a great resource.

“I think we can really position ourselves in a very, very unique way that differentiates us from other academic institutions, yet stays true to our values of being a more nimble and entrepreneurial institution,” Gerngross says.

The incubator launches on the ground floor of 4 Currier Place with a barbecue for students. Davis calls the summer term the “beta launch” of the center, borrowing a term from the world of business start-ups and software. It will be a time to refine the program in preparation for a grand opening in the fall, when many of the alumni who have funded the project will be honored.

That is not to say there isn’t a lot planned for when the term begins, he says. The center’s co-curricular programming for the summer term includes a six-week new venture boot camp, offering undergraduates a chance to explore ideas for start-ups while learning the basics of venture formation and financing, and organizational team-building.

The center will also organize workshops and events such as the DEN Founders Forum, pitch nights, and women in business meet-ups, and will coordinate the programming for the “DEN in Residence” living/learning community, set to launch with 26 students in the fall term on the fourth floor of New Hampshire Hall.

“Our mission is to support President Phil Hanlon’s vision for experiential learning and organize and energize the entrepreneurial ecosystem in support of Dartmouth entrepreneurs—we are for entrepreneurs, by entrepreneurs,” Davis says.

Jamie Coughlin, director of New Venture Incubator Programs and the Dartmouth Regional Technology Center, recently showed off the new space on the ground floor of Currier Place, describing it as “the embodiment of the entrepreneurial spirit and journey, raw, open, and industrial, like a Brooklyn loft, while thoughtful and unique to the Dartmouth, N.H., experience.”

The space has an open layout, with retractable orange power cords hanging from the ceiling, polished concrete floors, reclaimed hardwood walls, and glass conference rooms with barn-style doors. Flexible, open work spaces will be clustered for teamwork, or separated for individual projects. A large retractable screen will facilitate video conferencing, and all the components can be pushed aside for larger gatherings such as workshops, seminars, and panel discussions.

Coughlin came to Dartmouth in July from New Hampshire’s oldest business incubator, the abi Innovation Hub, where he was CEO and entrepreneur-in-residence. He calls the Dartmouth center “a start-up Nirvana.”

“This is the tangible manifestation of President Hanlon’s vision for Dartmouth as a hub of entrepreneurial energy and innovation,” Coughlin says.

The center and incubator are entirely self-supporting, funded through major alumni donations totaling more than $3.5 million as of June 1, and on track to reach the $4 million target by the end of the fiscal year, he says.

“I have been part of a lot of incubators, but this is a special environment that we have created. We have a world-class network of alumni entrepreneurs and venture capitalists, and a growing number of talented students and faculty with big ideas,” Coughlin says. "We look forward to providing them with a creative place to experiment, along with the mentorship and seed capital to power their ideas into action.”