For Watanabe’s Students, New Zealand Is Full of Lessons

Associate Professor of Anthropology John Watanabe, who studies the Maya peoples of Guatemala and Mexico, has been traveling to a venue outside of his specialty area to shepherd Dartmouth undergraduates through the cultural landscape of New Zealand. 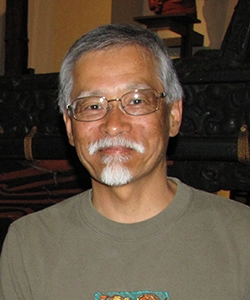 “One of the things the students learn is that a place may not be as it seems. What initially appears familiar, with time may indeed seem strange,” says Associate Professor of Anthropology John Watanabe. (Photo by John Tansey)

While previously a stranger to this part of the world, Watanabe has found it to be a good venue for a Foreign Studies Program (FSP). He has led groups there for four of the program’s 11 years during Dartmouth’s winter term.

Watanabe says many students have said they wouldn’t have visited New Zealand if they hadn’t participated in the program.

Watanabe says his students encounter a land and its people that at first appear familiar—English-speaking, progressive, and looking like home. These first impressions are reinforced by the courses they are taking at the FSP-affiliated University of Auckland.

“During the first half of the 10-week term they’re in residence halls. Then they move to homestays with local families, where they start talking to people outside of the university,” he says. “They hear things from these folks that convey different messages from what they have heard from their professors.’”

Today’s New Zealanders are descendants of British settlers, Asian immigrants, and native Maori—the indigenous Polynesians who constitute 15 percent of the population. With a history similar to Native Americans, marked by broken treaties and loss of ancestral lands, friction persists between the Maori and Pakeha, as white New Zealanders are called. Watanabe says that today’s Maori are marginalized. 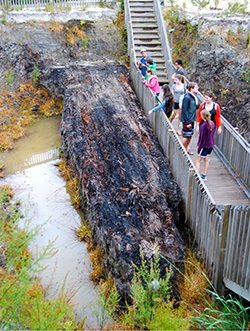 Dartmouth students take a look at an ancient petrified kauri tree, a species that once covered a large part of the region north of Auckland. The kauri are tall straight trees without branches except at the crown. (Photo by John Watanabe)

“Historically, New Zealand is going through adjusting to a ‘new normal’ in ethnic and gender relations that the U.S. went through beginning about 25 years ago (and is still going through),” says Watanabe. “Seeing firsthand some of the conflicting attitudes and ambivalences that people have, probably much more common here in the U.S. back in the ’60s, ’70s, and ’80s, a number of students at first took these to be racist or at least politically unacceptable.”

As they came to know their host families, the students gained perspective. “I think they learned some good lessons about how you have some really diverse attitudes. Part of being an anthropologist is trying not to jump to conclusions too quickly.”

Watanabe says that the students also learned that being Maori is not dependent on how one looks. The Maori have been there 700 years, while the British began colonizing in the early 19th century, with predictable genetic consequences.

“A lot of the Maori today, particularly from the South Island, look as much Scottish or European as they do Maori, but they are ethnically as much Maori as anybody else,” Watanabe says. “There are still lots of arguments between different Maori about who is really Maori anymore or not.”

“One of the things the students learn is that a place may not be as it seems. What initially appears familiar, with time may indeed seem strange,” Watanabe says. “This is the reverse of what you get in a lot of other situations where the culture shock is all at once at the beginning and then you get over it. Here they suffer their culture shock in a prolonged and gradual process.

”From the Maori studies courses, they learn a lot about the Maori perspective, about the ongoing struggles for recognition and cultural self-determination. In an evaluation one student said that, from going on the FSP, they’ve learned that there are no easy, simple solutions to these issues, and that they are never finished.“

While expanding their horizons on a cultural anthropological level, the students also brought home some life lessons. Watanabe says that they seem to have made a conscious effort to get to know others in the Dartmouth group, people they would have never gotten to know otherwise on campus. He related one comment: ”Now I can imagine this person being my best friend on campus, and I would have had no reason to talk with them beforehand."