In the weeks since his arrival in Hanover, summer term Montgomery Fellow Enrique Martínez Celaya, whose work is held by the Metropolitan Museum of Art, the Whitney Museum of American Art, the Museum of Contemporary Art in Los Angeles, and other institutions around the world, has connected with a range of campus communities. 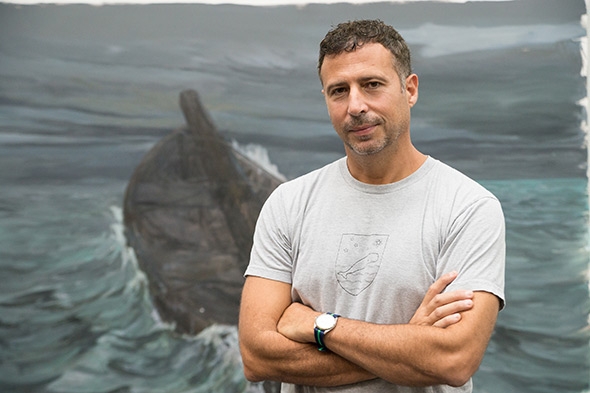 Artist Enrique Martínez Celaya, the summer 2014 Montgomery Fellow, is on campus for the month of July. (Photo by Eli Burakian ’00)

The scope of those encounters hints at the breadth of Martínez Celaya’s interests, which in fact extend further: Before turning to art, he trained as a physicist as an undergraduate at Cornell and in the quantum electronics PhD program at the University of California Berkeley. Martínez Celaya is in residence at Dartmouth for the month of July. His work Burning as It Were a Lamp is on exhibit in the Hood Museum of Art’s Harrington Gallery through August 10.

A suite of nearly finished paintings joins Martínez Celaya in Hanover. The paintings, he says, “have to travel together,” and ideally—if work in his Hopkins Center studio goes well—will continue on from Hanover to London, where they will be shown this fall. 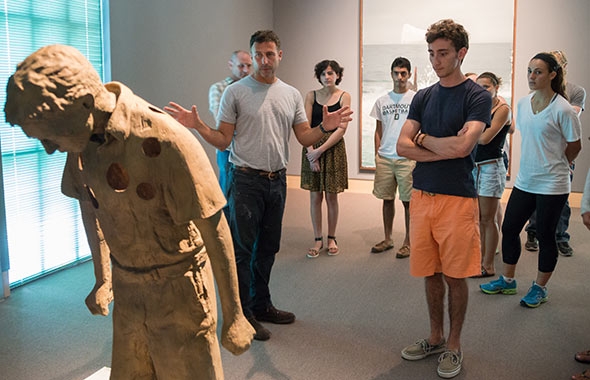 Montgomery Fellow Enrique Martínez Celaya discusses his work “Burning as It Were a Lamp” with students in Gerald Auten’s “Drawing I” class. The work is on exhibit at the Hood Museum of Art July 12 through August 10. (Photo by Eli Burakian ’00)

“What might seem like a logistical challenge—how to have the paintings travel as a set—is in fact an artistic one,” he says. Regardless of which of the paintings he eventually chooses to show in London, Martínez Celaya needs to be in the company of the entire set in order to work on any part of it, he says. The Hood exhibition highlights the fact he works as a sculptor and painter—and he notes, that work is often rooted in his writing.

Enrique Martínez Celaya will give two public presentations during his time at Dartmouth.

Lunchtime gallery talk “Enrique Martínez Celaya: Burning as It Were a Lamp” July 22 at 12:30 p.m. Second-floor galleries, Hood Museum of Art Martínez Celaya will talk about his most recent installation, which is on view in the museum’s Harrington Gallery.

Martínez Celaya believes his work tends to coalesce in 10-year cycles, and his July 15 Montgomery Fellow lecture, “Five Projects since Schneebett” (an installation that he dates 2003-2011), will review his most recent works. Of the pieces headed for the London show, he says, “This feels like something new.”

While at Dartmouth, in addition to visiting the Orozco murals at Baker Library, Martínez Celaya plans to do research in the College’s Robert Frost archives. Frost, he notes, had a substantial life in Florida, establishing a home and gardens there. Martínez Celaya plans to explore the apparent incongruity of that life with Frost’s “New England persona” in his future work.