Athletes, from an outside perspective, usually occupy a single dimension in our minds. They’re in uniform, digging their heels in to hold down the one-yard line on fourth and goal, diving to head the ball in off a corner kick, making their way back to the weights to add two more 45s to the rack. They live, they train, they fight on the field. But after a lifetime of basketball and two ACL tears that put her on the bench for nine months apiece, Kaitana Martinez ’16 had to ask herself, “Who am I if not an athlete?” 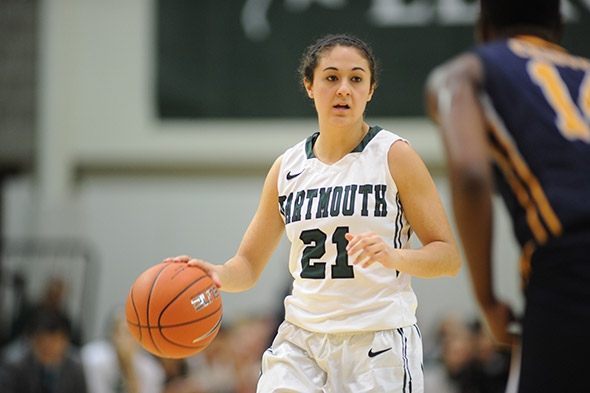 Kaitana Martinez ’16, a member of the Big Green women’s basketball team, is a neuroscience major with aspirations of becoming a doctor. (Photo by Gil Talbot)

“There’s a psychological component to recovery. Having the confidence to get back in the game is a challenge,” Martinez says. “Who am I? Because sports won’t last forever. As an incredible as it is, it will come to an end.”

In her time of rehabilitation before coming back to the court wearing the Green and White, Martinez set out to find, she said, the different components of her fluid identity that make her into not only a Division I athlete, but a member of her many communities both at home and in Hanover. Her most recent journey took her to Cusco, Peru, to live with a host family for 10 weeks while working both in a school for 11 to 15-year-olds with special needs and a medical clinic. She chose Peru, she said, because she has been trying to reconnect with her Hispanic roots by gaining a greater mastery over the language.