Dancing Electrons Are at the Heart of a Laser Breakthrough

A team of Dartmouth scientists and their colleagues have devised a breakthrough laser that uses a single artificial atom to generate and emit particles of light—and may play a crucial role in the development of quantum computers, which are predicted to eventually outperform even today’s most powerful supercomputers. 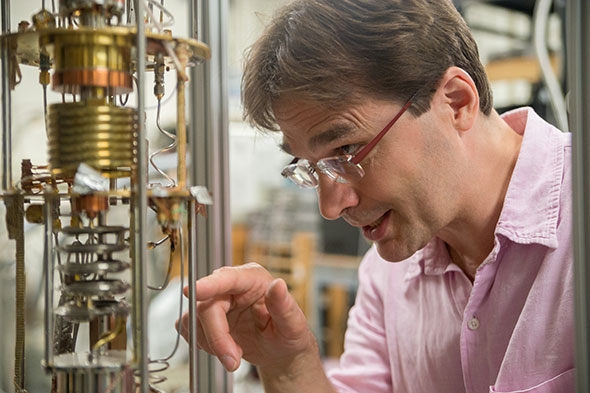 Using a revolutionary laser Dartmouth physicist Alex Rimberg and his team are blazing a trail to a new method of information transmission to and from a quantum computer. (Photo by Eli Burakian ’00)

The new laser is the first to rely exclusively on superconducting electron pairs. “The fact that we use only superconducting pairs is what makes our work so significant,” says Alex Rimberg, a professor of physics and astronomy at Dartmouth. Superconductivity is a condition that occurs when electricity can travel without any resistance or loss of energy.

“The artificial atom is made of nanoscale pieces of superconductor,” says Rimberg. “The reason for using the artificial atom is that you can now make it part of an electrical circuit on a chip, something you can’t do with a real atom, and it means we have a much clearer path toward interesting applications in quantum computing.”

Rimberg and his team describe their new laser in a paper appearing July 22 in the journal Physical Review B.

Light from the laser is produced by applying electricity to the artificial atom. This causes electrons to hop across the atom and, in the process, produce photons that are trapped between two superconducting mirrors. The process is “invisible to the human eye; the hopping electrons dance back and forth across the atom in time with the oscillating waves of the light,” Rimberg says.

With the new laser, electrical energy is converted to light, which has the ability to transmit information to and from a quantum computer. ”With a quantum computer you have to get the information from point A to point B,“ he says. ”A computer that does a calculation but has no way of getting the information anywhere else isn’t particularly useful. Our laser might offer an easy way of producing the kinds of weird quantum states of light that could be used to carry quantum information around.“

Rimberg says that much of the laser development came out of the thesis work of one of his former graduate students, Fei Chen, first author on the Physical Review B paper, with help from another graduate student Juliang Li, and postdoctoral researcher Joel Stettenheim.

”We had theoretical support from Professor Miles Blencowe and his graduate student Erind Brahimi, and a collaborator of ours, Professor Andrew Armour of the University of Nottingham,“ says Rimberg. ”We also had collaborators at the National Institute of Standards and Technology (NIST), namely Dr. Ray Simmonds and a graduate student, Adam Sirois, working with him.”