Dartmouth welcomed more than 100 researchers in American studies to campus for the 17th annual Futures of American Studies Institute in June. Participants included faculty members and advanced graduate students from universities and colleges in the U.S. and abroad, including Dartmouth graduate students in comparative literature and in the Master of Arts in Liberal Studies (MALS) program. The institute is directed by Donald Pease, Geisel Third Century Professor in the Humanities, and professor of English and of comparative literature. Pease launched the program in 1997, following the departure of the School for Criticism and Theory, which had been based at Dartmouth for 10 years, beginning in 1986. 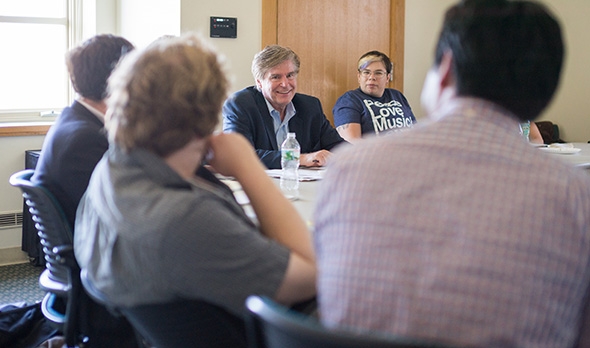 Donald Pease, the Geisel Third Century Professor in the Humanities, leads a seminar session at Dartmouth’s 2014 Futures of American Studies Institute, attended by advanced graduate students including, at right, Juliette Arico, a PhD student in global gender studies at the University at Buffalo, the State University of New York. (Photo by Eli Burakian ’00)

With the close of the 2014 session, the institute also marked the fifth and final year of its focus on “State(s) of American Studies.” Next year’s institute, Pease says, will take on “a series of topics and questions across the field” that have emerged from previous years’ discussions.” Among them: the significance of digital technology in teaching and archiving; “surface” and “deep” reading; and the evolving interactions between science and literature, especially cognitive science. The international focus of the institute continues to grow as well, mirroring the increasingly global nature of the field, Pease says,

The Dartmouth institute is remarkable for the level of engagement it offers to emerging scholars, its organizers say. Post-doctoral students and those who are writing their PhD dissertations are invited to bring a chapter of a work-in-progress for discussion and critique by institute faculty and fellow students. The benefits to those young scholars, Pease says, are invaluable: fresh insights, a connection with scholarly networks (including in scholarly publishing), and even, he suggests, “good leads in a tough job market.”

Dobson oversees the institute’s presence on social media. Over the past two years in particular, he says, previous years’ attendees who have not able to be present in Hanover for the conference have joined in remotely, extending and enriching conference discussions through social media.

The 2015 Dartmouth Futures of American Studies Institute will be held in Hanover in mid-June, 2015.