Sexual assaults must be eradicated from university campuses, said U.S. Rep. Ann McLane Kuster ’78 as she opened the Dartmouth Summit on Sexual Assault on Sunday evening. 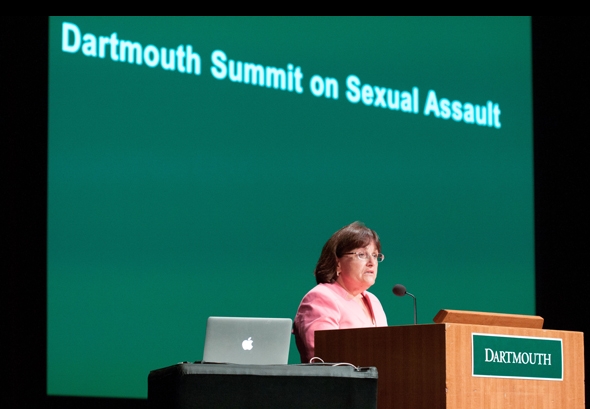 “As a nation we will reach a tipping point where nonconsensual sexual encounters on our college campuses are a thing of the past,” she said.

“My most important message to you this evening is one of encouragement and perseverance. I am an optimist by nature and I believe in solutions,” said Kuster (D-N.H.), a member of the House Committee on Veteran’s Affairs who has been outspoken in the push for House hearings on sexual assault in the military and for passage of a bill protecting military sexual assault whistleblowers. “We must all come together to ensure that no one ever thinks that this type of behavior is acceptable.”

Kuster, whose two sons are Dartmouth graduates, said she sees similarities between the military and university campuses. “Both have an insularity that present both challenges and opportunities.”

“If Dartmouth is to continue to be a leader in a moral world, then Dartmouth needs to take responsibility to lead on this issue. This is a question of safety for our students, and, more important, it’s a question of respect for every member of the Dartmouth community,” Kuster said in a brief interview before the evening’s 90-minute program.

About 200 people gathered in Spaulding Auditorium in the Hopkins Center for the Arts to hear Kuster and presenter Gail Stern, an educator and curriculum developer who is co-owner and chief academic officer of a company called Catharsis Productions.

Stern’s presentation was called “The Canary in the Mineshaft: What Rape Jokes Signal About Our Culture.” A former stand-up comedian, Stern co-authored a rape prevention program called Sex Signals that is used at universities and military installations. Last night she talked about what she called “corrosive humor.” 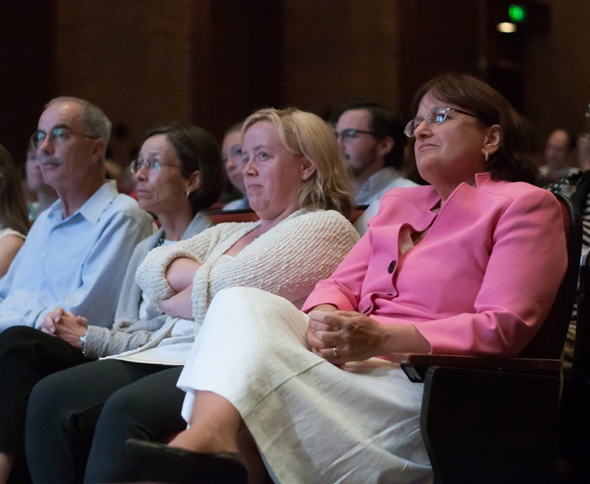 “I think it’s important to analyze what humor does. It’s ironic, because most of the time I spend talking about how powerful humor can be as a social change agent. And today I’m going to be doing the opposite and tell you how corrosive humor carries with it, in a very viral way, cultural norms, and does it in an incredibly subversive way to contribute to victim blaming and lack of offender accountability and frankly, I believe, incidents of sexual violence,” Stern said.

She urged audience members to “constantly respond to the rape jokes, I want you to write editorials, I want you to engage thoughtfully, because the greatest gift that we can give our students is the ability to critique the messenger. To add an analytical lens to the world and not just be passive receivers of information.”

The summit will feature plenary sessions open to the public tomorrow and Tuesday on a wide range of issues, including the role of the media in promoting a rape culture, federal perspectives on campus sexual assault, a review of the First Report of the White House Task Force to Protect Students from Sexual Assault, and a survivors panel.

“We thank you for joining us here for this important dialogue, and for the work you do every day on behalf of our students and our learning communities,” Dean of the College Charlotte Johnson told the audience last night.

The summit was organized by Johnson’s office in cooperation with David Lisak, a nationally recognized forensic expert on sexual assault; Claudia Bayliff, an attorney and educator who works on sexual assault issues; and President Phil Hanlon ’77, who in April called for an end to high risk behavior on campus. Lisak and Bayliff, who were present last night, are also presenting at the conference. Hanlon, who attended last night’s event, kicks off tomorrow’s session at 9 a.m., in Spaulding Auditorium.