David Lisak is a researcher and forensic consultant whose work includes the causes and consequences of interpersonal violence and the motives and characteristics of rapists. He consults with colleges and universities, the U.S. Department of Defense, and other institutions regarding sexual assault prevention policies. A featured speaker at the Dartmouth Summit on Sexual Assault, which begins Sunday, July 13, he agreed to speak with Dartmouth Now about his work. 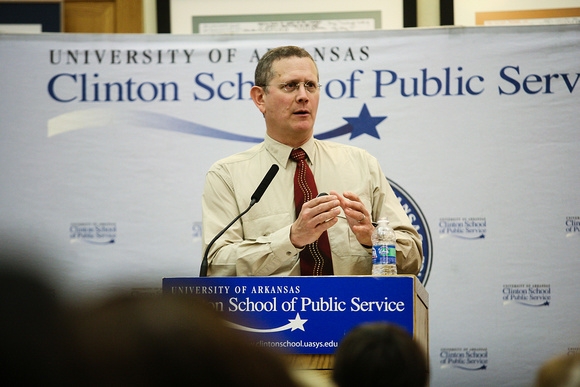 Researcher and forensic consultant David Lisak speaks at the Clinton School of Public Service at the University of Arkansas in April 2012. (Photo by Jacob Slaton)

In your presentations and testimony on the forensics of sexual assault on college campuses, what information do your audiences generally find most surprising?The most surprising information is invariably the data that indicate that sexual assault on college campuses looks quite a bit like sexual assault anywhere else in society. A very large percentage of assaults are committed by serial offenders who are quite practiced in their techniques, including their choice of victims. Like all sex offenders, they target individuals whom they view as vulnerable, and they use ruses and manipulations that increase that vulnerability, including the physical isolation of their victims. I find that in describing and discussing these data, I am often confronting a schema block. Namely, that we can’t possibly have actual sex offenders among our students. Unfortunately, the data are quite clear that we do.

For More Information For the summit schedule, speaker biographies, and other information, visit: Dartmouth Summit on Sexual Assault.

What is the most important change colleges can make to the way sexual violence prevention is commonly practiced?I think the most important change that needs to happen is at a meta level or, put another way, at the level of campus leadership. What we still lack in higher education is a comprehensive and developmental approach to sexual violence prevention. We have for too long relied on fragmented programs and initiatives, often ones funded through temporary grants. There has been a lack of continuity, a lack of long-term planning, and frankly, a lack of leadership from the very top of our institutional hierarchies. Sexual violence prevention must be an ever-evolving, multi-faceted, community-wide endeavor. It must be founded on a thorough analysis of each institution—its communities and subcultures. Different parts of the community need to be targeted with different messages. Some groups are natural allies, ready to be recruited into active participation in prevention efforts. Some groups will need remedial education. Some groups may need policing. Further, what we teach to and expect from our students must be tailored to their stage of development. How we engage first-year students should be quite different from how we engage, and what we expect from, our seniors.

Some critics of the adjudication model involving an independent investigator and administrative sanctions argue that it violates the legal rights of the accused. How would you answer that criticism?My first response is that I am not an attorney, so this is really outside the domain of my expertise. However, I can offer two comments that I hope will keep me (mostly) out of the weeds. First, I believe that the foundation of any sound model of adjudication must be a highly professional, highly skilled, and comprehensive investigation. I think the jury is still out on what the best model is for ensuring such investigations. The independent investigator model can work well—if the investigator is highly skilled and experienced. If the investigator lacks essential skills or experience, then the model fails. I am somewhat partial to having campus detectives handle sexual assault investigations. They are professionally trained to investigate crimes, and with added, specialized training in sexual assault investigations, they can be highly effective. Second, and here I am simply parroting what I’ve heard from many attorneys, we need to be clear that a university judicial process will inevitably differ from a criminal justice process because of, among other things, the nature of the ultimate sanctions that can be applied. The maximum punishment that a university can mete out is essentially “you can no longer be a part of this community.” The maximum punishment that can be meted out by the criminal justice system is many, many years in a state penitentiary and lifetime registration as a sex offender. In part because those are very different outcomes, the rights of the accused differ.

How well are American institutions of higher education doing at identifying the level of sexual violence on their campuses?This is a question that begs for data. We have very reliable data about the incidence and prevalence of sexual violence on college campuses generally, but we do not have reliable data regarding individual campuses. Comparing the number of assaults that are reported to campus authorities is a very unreliable method of comparison because there is far too much variability in what is being reported. And since we know that only a tiny fraction of sexual assaults are being reported, we are really working with the wrong data set. So what we need are reliable data from individual campuses, and for that we are going to need regular “climate surveys” from campuses across the country. This should not be a controversial issue. We are institutions of higher learning. The very methodologies for measuring the incidence and prevalence of sexual violence were developed on our campuses by our researchers. The military academies are already conducting regular climate surveys and publishing their results on the web. The absence of such data from civilian higher education represents a moral failing on our part.

What is the significance of the Dartmouth summit and what do you hope will be achieved here?The Dartmouth summit is a precious opportunity for professionals from higher ed institutions from across the country to join forces, to meld their creativity and experience in the service of finding viable solutions to the many complex issues and problems. The summit is designed to be much more than a conference, and much more than an exchange of ideas and perspectives. It is designed to create an infrastructure—working groups—that will analyze some of the highest-priority issues faced by higher ed and then work out model policies, protocols, strategies:  concrete solutions that can be adapted and adopted by institutions across the country. The summit will launch a process that we anticipate will extend at least 12 months into the future.