Colleges and universities must seize this moment to set a courageous example for American society by addressing sexual violence on campuses, said David Lisak on Monday, the first working day of the Dartmouth Summit on Sexual Assault. 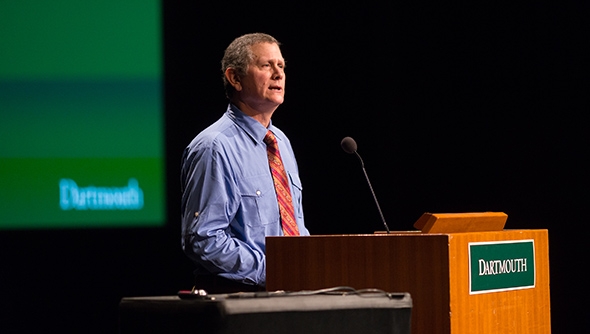 A Presidential Steering Committee has been established to recommend actions to end high-risk and harmful behavior in the following three critical areas: sexual assault, high-risk drinking, and lack of inclusivity. The group will spend the summer researching and crowdsourcing the best solutions for the way forward. Members will examine the best practices of other universities; speak with the leading experts in each area of focus; and solicit ideas from student organizations, individual students, and every member of the Dartmouth family. Find out more.

“We will either define ourselves as just another corporate institution, focused on self-protection, self-aggrandizement, and self-promotion, focused on the immediate bottom line. Or we will define ourselves as an institution worthy of the label ‘higher education,’” said Lisak, a nationally known researcher and forensic consultant on sexual assault.

Colleges and universities must lead by acting with moral integrity, he said. “We, the institutions of higher education, are facing a historic decision point.”

Lisak said that while institutions everywhere are struggling to confront sexual violence, it took more than two years to get a national summit off the ground because many administrators are “between scared and terrified of making the wrong decision.”

Catherine Lhamon, the assistant secretary for civil rights at the U.S. Department of Education called on colleges and universities to undertake regular “campus climate surveys” and to be transparent about the results.

Lhamon, whose office is responsible for enforcement of the federal Title IX law, appeared with Anurima Bhargava, chief of the educational opportunities section of the U.S. Justice Department’s Civil Rights Division in a Monday afternoon panel at the Dartmouth Summit on Sexual Assault. More than 300 people attended the discussion in Spaulding Auditorium, which was moderated by Professor of Native American Studies N. Bruce Duthu ’80.

Bhargava agreed that better data from institutions of higher education is a critical step toward getting control of the problem of sexual assault on campus. She said transparency is also vital for the government agencies that enforce federal legislation related to sexual assault.

“This has to be an inclusive process. How do we do this together?” Bhargava said. Answering that question is what brought people together at the Dartmouth summit, she said.

Many of the questions from the audience centered on how institutions can balance the sometimes conflicting federal mandates of reporting of incidents though measures such as the Clery Act, which the requires annual reporting of crime statistics from all U.S. college campuses; and insuring confidentiality as outlined in the federal Family Educational Rights Privacy Act, commonly called FERPA; as well as protecting the constitutional rights of those accused in assaults.

Lhamon said finding this balance is difficult, but it can be done through the sharing of best practices, and through transparency on the part of federal agencies as well as colleges and universities. This should include voluntary publication of campus climate data as well as public disclosure of federal enforcement actions and resolution agreements.

The intent of Title IX and Clery is not to force colleges to become criminal prosecutors; “the role of adjudication is making sure students are safe and to insure all are treated fairly,” Lhamon said. “The fact that sexual assault is a crime does not take away from that obligation for safety.”

When President Phil Hanlon ’77 endorsed the idea of a working conference—drawing on representatives of colleges and universities across the country, government officials, national experts, and nonprofit groups—all the pieces came together, Lisak said. The goal of the summit is to allow the sharing of ideas and data, and to build a structure of working groups that will continue to address these problems on a national level.

President Hanlon told several hundred gathered for Monday’s opening session that institutions of higher education make no claim to having all the answers. Nor do they believe the problems of sexual violence are unique to college campuses, he added.

“Rather, our leadership on this issue is based on the principle that great universities are willing to take on the most daunting changes of the world in seeking to do the right thing,” Hanlon said.

“Indeed, today is about all of us—campuses and organizations across the country—joining together and taking ownership of this challenge. It is about pooling our collective experiences and looking at these issues through an academic lens to identify the very best practices for prevention and response and to understand why some of these practices succeed where others do not.”

Conference participants have organized five working groups that will continue the work the summit started, said Claudia Bayliff, an attorney and educator on issues related to sexual assault. Bayliff, who was civilian chief of the U.S. Air Force’s Sexual Assault Prevention and Response Program, was also an organizer of the Dartmouth conference in cooperation with Lisak, Dean of the College Charlotte Johnson’s office, and Hanlon.

The working groups each include 15 to 20 participants from institutions of higher education led by professional consultants on different topics. The topics are focused on legal issues; investigation and accountability; research and assessment; direct services and response; and prevention and education.

Lisak told the gathering at the morning session that they were not there to watch, but to participate in the process of reform. And, he said, the organizers are looking for another institution to step up to host a conference to discuss this work sometime in the next year.

“Dartmouth stepped up and in so doing made this gathering possible. There are other institutions—represented in this room—that have the necessary resources to do likewise,” Lisak said. “Please expect to be challenged in the coming months to be the next Dartmouth.”