Joshua Schoenbart ’16, who started his first company at age 10 and now works with the Office of Entrepreneurship and Technology Transfer (OETT), will represent the United States next week at the G20 Young Entrepreneurs’ Alliance Summit in Sydney, Australia. 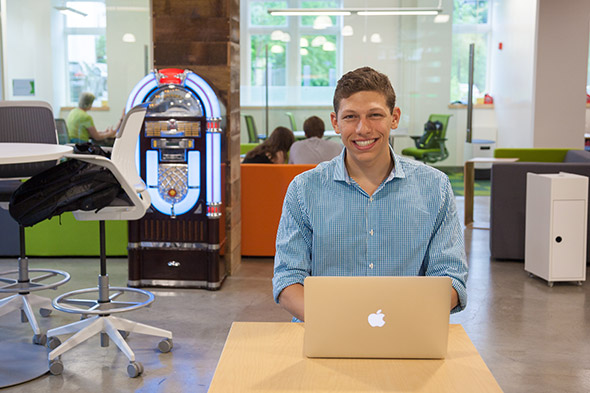 The summit will bring together more than 500 young entrepreneurs and leaders in Sydney from July 18 to July 22 to share their ideas with business and political leaders representing the G20 countries of Australia, Brazil, Canada, China, France, Germany, India, Indonesia, Italy, Japan, Mexico, Russia, the Republic of Korea, Saudi Arabia, Turkey, the United Kingdom, the United States, South Africa, Argentina, and the European Union.

“I am incredibly honored to represent the United States, Dartmouth College, and President Hanlon’s new initiative with the Office of Entrepreneurship and Technology Transfer,” Schoenbart says. “Experiential learning—learning by doing—is the future of education.”

Schoenbart is one of about a dozen U.S. delegates to this year’s summit, which aims to create a strategy to reduce youth unemployment to below 10 percent by 2030 and proposes that youth entrepreneurship be integrated into the United Nations Millennium Development Goals as a solution to unemployment.

At Dartmouth, Schoenbart has been working with the Innovation Center and New Venture Incubator to further develop his company, The EyeBook, an online aggregator of eye care professionals. Schoenbart developed the company while still in high school in Syosset, N.Y. He was already a seasoned entrepreneur when he started the company: His first venture was buying and selling eyeglass frames through eBay when he was 10 years old.

Schoenbart says the focus of President Phil Hanlon ’77 on fostering an entrepreneurial spirit at Dartmouth is integral to his own work at the College. He has designed his own major in social entrepreneurship, which includes coursework at the Tuck School of Business, as well as work in the sociology, mathematics, and geography departments.

“Joshua is a great example of why we created the New Venture Incubator and are supporting undergraduate entrepreneurship,” says Jamie Coughlin, director of New Venture Incubator Programs. “He has participated in our workshops, mentorship sessions, and overall support for his early stage venture, The EyeBook.”

Schoenbart helped with the design and planning of the incubator, Coughlin says. “It is our pleasure to support him in his participation in this year’s G20 Young Entrepreneurs’ Alliance Summit, as an ambassador of the greater Dartmouth Entrepreneurial Network.”