Survivor: Without Justice, Sexual Violence Will Not End

Laura Dunn, a survivor of campus sexual assault and an activist against gender-based violence, said she is not fighting for better prevention programs.

“My goal is to improve response. When we bring justice, then we will stop the problem,” she said. 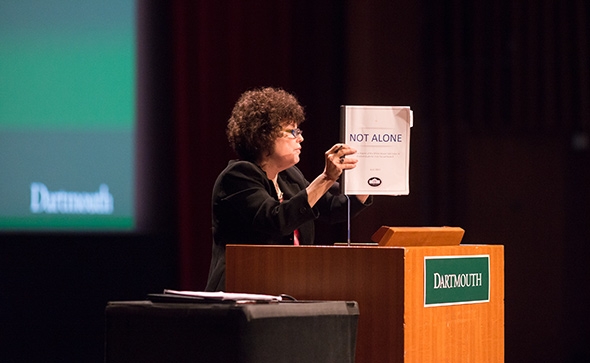 Lynn Rosenthal, the White House Advisor on Violence Against Women, speaks at the Dartmouth Summit on Sexual Assault on Tuesday. (Photo by Eli Burakian ’00 )

Dunn was part of a panel of survivors and victim advocates who gathered Tuesday morning during the second working day of the Dartmouth Summit on Sexual Assault. About 250 people gathered in Spaulding Auditorium for the morning session.

The panel also included Leslie Morgan Steiner of the One Love Foundation, who is a survivor of domestic violence; Curt and Christie Brungardt, leadership studies university professors who launched Jana’s Campaign to fight gender violence after their daughter Jana Mackay was murdered by an ex-boyfriend; and Dartmouth Professor of Philosophy Susan Brison, author of the book Aftermath: Violence and the Remaking of a Self, about surviving a near-fatal rape and murder attempt in France in 1990.

Lynn Rosenthal, the White House Advisor on Violence Against Women, said the Dartmouth summit comes at a crucial time in the long campaign to fight gender violence.

“It is difficult and it is challenging, but if we get this right, we will have a cohort of graduating students who know sexual assault is wrong,” she said.

In decades of working to end violence against women, she has never seen such a strong voice from survivors, such open discussion among institutions and groups, and such a will for change among campus activists and administrators, she said. She thanked those who came to Dartmouth to confront the issue and encouraged their efforts.

If the work continues, this new generation will help create a safer, more supportive climate on campuses and throughout our society, she said.

Rosenthal participated in the drafting of the White House Council on Women and Girls report to President Obama that was released in January, when the president called the White House Task Force to Protect Students from Sexual Assault. She spoke Tuesday afternoon in Spaulding Auditorium to the gathered participants at the Dartmouth Summit on Sexual Assault along with Bea Hanson, principal deputy director of the U.S. Department of Justice Office on Violence Against Women.

“This is the moment in time we’ve been waiting for,” Rosenthal said.

Dunn spoke about her rape by two male members of her crew team at the University of Wisconsin, her initial silence and guilt, and her decision to come forward. Every player in the system—the college investigators, the local prosecutor, and a private attorney—discounted her story and failed to bring her justice, she said. Rather than give up, she took her story to the national media, and she became an attorney. She was a lobbyist for reauthorization of the Violence Against Women Act and became part of the White House Task Force Protecting Students Against Sexual Assault.

Survivors must be included in the process as colleges and universities develop a response to sexual assault, she said. “If a survivor is not involved, you are not doing enough,” she said. “Empowering victims does more.”

And education programs, prevention efforts, and action plans are not enough, Dunn said. Perpetrators must understand that there will be consequences. “It will continue until there is a cost,” she said.

Several of the panelists spoke about combating the misconceptions many hold about gender violence. Some people do not realize that perpetrators are often known to victims, and some believe that alcohol use blurs the lines of consent.

And the language used to talk about the problem can in some ways further those misconceptions, Brison said.

The public portion of the summit was set to conclude Tuesday night, but registered participants will continue with sessions through Thursday, and the working groups formed during the week will continue discussions throughout the year.