Read the full story, published in the July/August 2014 issue of Dartmouth Alumni Magazine. 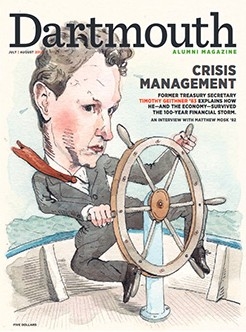 The headline on a recent business blog—“Massive Wall Street Bonuses Are Back”—aptly sums up the kind of good news-bad news paradox that has left Timothy Geithner ’83 perpetually trying to explain himself. Yes, by most measures, the nation’s 75th U.S. Treasury secretary, who served from 2009 to 2013, succeeded in navigating the country out of the worst economic crisis since the Great Depression. But even as the path he championed reinvigorated Wall Street, it yielded rich rewards for many of the same people who were considered responsible for the crisis in the first place. It was this messy reality Geithner was again trying to explain when he sat down with DAM contributing editor Matthew Mosk ’92 in March for one of his first interviews since leaving the Obama administration in January of 2013. “To protect the country from the financial crisis,” he said, “we had to do a bunch of things that looked like we were aiding the arsonists.”

Geithner tells Mosk he has moved past the rumors that he was gunning to take over as president of Dartmouth and opens up about his tenure.

Whom do you blame for the financial crisis?Well, there’s a huge amount of blame to go around.

That’s exactly what Henry Paulson told DAM about four years ago under similar circumstances.There is. And there’s massive regulatory failure, although not the type people usually think. There was a lot of bad fraud, predation, abuse. There was a bunch of stuff that involved monetary policy here and around the world that made the conditions for a bubble powerful. There’s some classic moral hazard in parts of the financial system—GSEs [government-sponsored entities], for example—and some bad incentive problems, as economists would say, in a bunch of those markets. All that stuff contributed.

But what causes really severe financial crises, the ones that end in panic—like ours—is usually bigger than that. It’s mostly about the conditions that lead to long periods of rapid-rising borrowing relative to income, like a huge boom in credit. What produces that is not really regulatory failure or fraud or abuse or predation; it’s a more basic thing. It’s sort of a combination of optimism and hope about the future. And that only comes when you’ve had long periods of relative stability, because people sort of get used to the possibility that income’s going to rise, house prices are going to rise, recessions will be short and shallow, no crisis to fear, no recession really deep.

Then they are more confident. They can lend more and borrow more and that’s what creates the conditions for a classic financial failure. In our case that basic core thing was magnified by the fact that our financial systems dramatically outgrew, through time, all the safeguards of the Great Depression.