Tucker Foundation’s Mission to Be Served Through Two Centers

Two new centers will carry on the work of the William Jewett Tucker Foundation. One will focus on religious and spiritual life and one will be dedicated to public service. 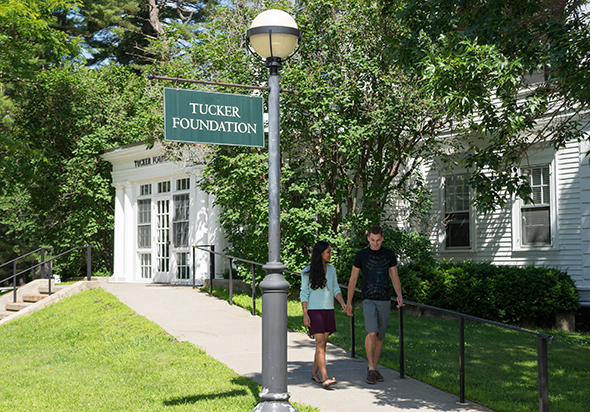 A search for leaders of the Tucker Center for Religious and Spiritual Life and the Dartmouth Center for Public Service will be launched in the coming months. (Photo by Eli Burakian ’00)

The College’s Board of Trustees approved the new structure at its June meeting. The Trustees’ decision follows extensive study this past academic year, led by a task force that began work last fall.

“The new Tucker Center for Religious and Spiritual Life will support the spiritual journeys of our students, faculty, and staff,” says Theresa M. Ellis ’97, interim dean of the Tucker Foundation. “The Dartmouth Center for Public Service will prepare Dartmouth students for leadership in social service, social entrepreneurship, philanthropy, and social activism.”

The new centers will allow both religious and spiritual life and public service to thrive on the Dartmouth campus, “embracing the fullness of their respective missions,” says Ellis, who was an advising member of the task force. The centers will work closely together as they identify opportunities for collaboration, she says. This decision will also enable resources that had previously been directed to administration to be reallocated for programming.

“As an alumna, I recognize that the Tucker Foundation has a rich and storied history at Dartmouth. Many students have been involved in its various programs. I think that this decision creates an opportunity for the College to better serve our students and our community as we move forward,” Ellis says.

Ellis, the Gleitsman Visiting Practitioner at the Center for Public Leadership at Harvard’s Kennedy School of Government, has agreed to stay on as interim dean of Tucker to help guide reorganization in the coming academic year, says Vice Provost Martin Wybourne, who convened the task force to review Tucker’s mission and organizational structure.

A search for leaders of both centers will be launched in the coming months, Wybourne says.

Two working groups will be convened to help shape the new centers—one for the Tucker Center for Religious and Spiritual Life and one for the Dartmouth Center for Public Service. Dartmouth faculty, staff, students, and alumni, as well as members of the broader community, will be invited to weigh in as the path forward is charted, Ellis says.

”We imagine a broad process starting this summer and wrapping up by the end of fall term,“ she says. ”Ultimately, by engaging a broad swath of the community, we hope that these new centers can be part of the effort to improve campus climate.”

Dartmouth Trustee Peggy Epstein Tanner ’79, a member of the Tucker Foundation’s Board of Visitors, called the proposal a positive step.

“This restructuring will be empowering to both centers while respecting the important legacy of the Tucker Foundation,” says Tanner. “Tucker will be able to expand its work promoting religious literacy and encouraging multi-faith dialogue. At the same time, the Dartmouth Center for Public Service will foster the kind of social engagement that Dartmouth students increasingly see as an essential part of the college experience.”