One of the most renowned art treasures at Dartmouth is the ambitious mural The Epic of American Civilization, painted by Mexican artist José Clemente Orozco between 1932 and 1934 in the reserve corridor of Baker-Berry Library, now the Orozco Room. The fresco is considered one of the finest examples of mural painting in this country by one of the greatest 20th-century practitioners of public art. 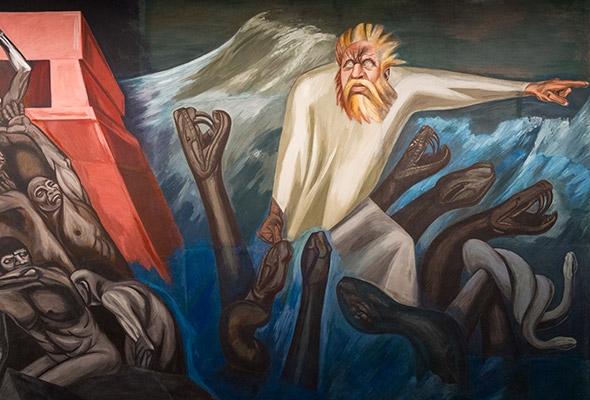 In addition to the finished mural, Dartmouth and the Hood Museum of Art possess more than 200 preparatory drawings, compositional studies, and historical photographs which provide invaluable insight into the entire artistic process. Due to their fragility, these materials are not on public view except for the rare occasion when they are shown in special exhibitions at the Hood.

Now, visitors to the mural, scholars of Mexican art, and audiences beyond the campus are able to view the materials through the new website Dartmouth Digital Orozco. This interactive tool is designed to allow visitors and audiences worldwide to explore Orozco’s monumental mural in conjunction with the preparatory drawings and documents on its making.

The website, developed in collaboration with the Neukom Institute for Computational Science, presents the mural as a photographic panorama in which the user can move virtually through the narrative from left to right while a lightbox populated with the supplementary materials appears below. The website is designed to operate through interaction with the touchscreen of a tablet device or the mouse or touchpad on a desktop or laptop computer.

“José Clemente Orozco spent almost two years, from 1932 to 1934, on Dartmouth’s campus as an artist-in-residence,” says Michael Taylor, director of the Hood Museum of Art. “As a result, Dartmouth owns not only one of his most famous murals but also more than 200 drawings that unlock the mysteries of his process. Now the faculty, students, and general public can explore both the drawings and mural side by side, thanks to this innovative, interactive tool.”

The principal innovative feature of the website is that the viewer can now study Dartmouth’s contextual material in juxtaposition with, and in some cases overlaid upon, the final mural, providing the opportunity to compare preparatory drawings and in-process documentary photographs with the finished product. The site also provides access to original research conducted by Dartmouth students who participated in courses about Orozco and the Mexican mural movement. This ongoing project will supply more information and documents to this site as students and scholars add to our knowledge about this important mural cycle.

Dartmouth Digital Orozco began in 2012 as a freestanding application developed for the iPad 2 by James Hughes, a Dartmouth PhD candidate in computer science. This inventive application, which runs locally and does not connect to the Internet, provided the template for the present website. While the original application relied on files and images stored locally on stand-alone iPads, Dartmouth Digital Orozco represents a web-supported, centralized service with remotely accessible, extensible content. It can be viewed anywhere, enhancing the experience of the mural not only for visitors to the Hood but also for a worldwide audience, many of whom will never have the opportunity to travel to Dartmouth’s campus. Visitors to the Orozco Room can borrow an iPad from the reserve desk for use while viewing the mural or use their own devices.