Fifty years ago, the Congress of the United States passed the Civil Rights Act of 1964, prohibiting discrimination on the basis of race, color, religion, sex, or national origin. The bill came before the U.S. Senate in February 1964, survived a 54-day filibuster, and was signed into law by President Lyndon B. Johnson on July 2. The struggle for racial equality had been waged for decades, and it continued to be fought throughout the 1960s. Visual artists mounted their own insurgency, acting on their commitment to the belief that progress can be won by changing the way people see things. 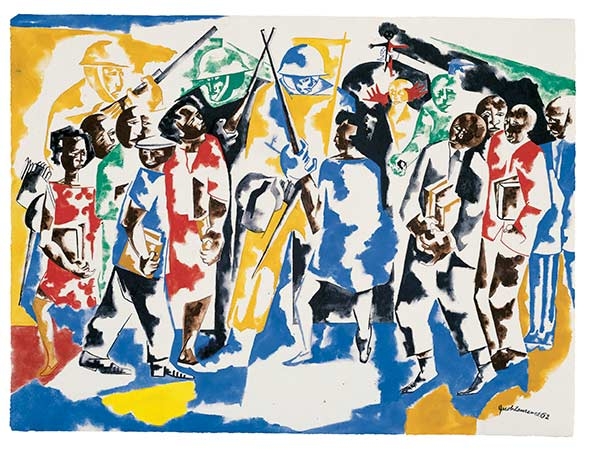 In observance of the 50th anniversary of this momentous legislation, Witness: Art and Civil Rights in the Sixtiespresents more than 100 works by 66 artists who merged their art and their political activism on behalf of civil rights. The exhibition, organized by the Brooklyn Museum, is among the few to explore how painting, sculpture, graphic art, and photography not only responded to the political and social turmoil of the era but also helped to influence its direction. Witness will be on view at the Hood from August 30 through December 14, and will be accompanied by lectures and other museum programming, a fully illustrated catalog, and a smartphone-based audio tour.

“This ambitious exhibition is an opportunity for everyone to encounter moving works of art and a spectacular array of innovative programs that emerge directly from the Hood’s teaching mission,” says Michael Taylor, director of the Hood. “Visitors will be able to explore, through the power of the extraordinary works of art on display, the many ways that people make a difference to themselves, their communities, and the world by taking action.”

No clear, contemporary road map existed for political activism in the arts at the outset of the 1960s. The established artists of the Cold War generation—primarily abstractionists who saw their work as subjective and self-contained—rejected the validity of art that was socially or politically activistic. A significant number of artists, driven by their convictions and commitment to their work, nevertheless tapped a wide array of aesthetic approaches to produce art in support of the cause of racial equality. The works in Witness encompass gestural abstraction, pop aesthetics, collage, assemblage, photography, minimalism, and collaborative printmaking. The artists who created them sought to move American culture closer to a civil society. They generated a multiplicity of dialogues about systemic racism and the disenfranchisement of African Americans, and they visualized affirmations of full citizenship, black identity, empowerment, and communal creativity.

Highlights of Witness include Jacob Lawrence’s response to the controversy surrounding school desegregation in the South with his Soldiers and Students, one of several compositions by the artist to focus on demonstrations and violence; Barkley Hendricks’ Lawdy Mama, which confers the awe and reverence once accorded Christian altarpieces on the figure of a beautiful woman crowned with a large, halo-like Afro; AfriCOBRA co-founder Jae Jarrell’s Urban Wall Suit, a fabric suit inspired by activist murals and urban graffiti that anticipates the current confluence of fashion and art; and Joe Overstreet’s The New Jemima, which reclaims a negative stereotype in bold fashion. Photographers represented in the exhibition, including Richard Avedon, Bruce Davidson, Roy DeCarava, Gordon Parks, and Moneta Sleet Jr., captured the events of the civil rights movement as both documentarians and activists, often altering public opinion with their images in newspapers and magazines such as Ebony and Life.

Witness represents an effort to recover a vital aspect of American art of the ’60s that has long been marginalized or ignored. While evoking the turbulence of their time, these works remain resonant for our increasingly complex society and for contemporary cultural activism in pursuit of social justice.

Witness: Art and Civil Rights in the Sixties is curated by Teresa A. Carbone, Andrew W. Mellon Curator of American Art, Brooklyn Museum, and Kellie Jones, associate professor in the Department of Art History and Archaeology at Columbia University. It was organized by the Brooklyn Museum and made possible by the Ford Foundation. Its presentation at the Hood Museum of Art was supported by Claire Foerster and Daniel S. Bernstein ’87, Kate and Yaz Krehbiel ’91, Thayer ’92, and the Leon C. 1927, Charles L. 1955, and Andrew J. 1984 Greenebaum Fund.