Matt McFarland ’16 was born in motion—racing, building, creating. After spending his youth skiing and running distance for his high school track and cross country teams, he walked on to Dartmouth’s lightweight rowing team as a freshman confronted by a sport he’d never encountered in his home state of Minnesota. 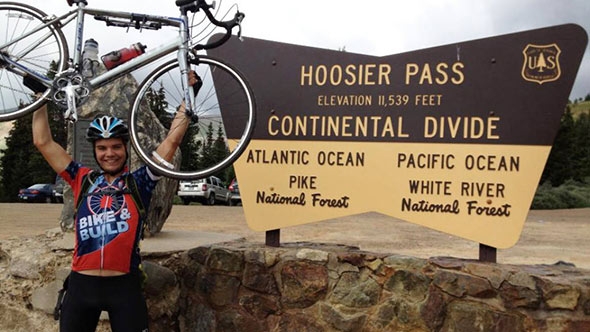 Matt McFarland ’16 biked 4,160 miles across the United States during the summer of 2013 with the Bike and Build program. (Photo courtesy of Matt McFarland)

Immediately after his first season with the crew team, McFarland wasted no opportunity to keep moving. He opted to take part in Bike and Build, during which participants took one of seven routes across the country on a bicycle. Departing from Providence, R.I., in early June and arriving in Half Moon Bay, Calif., on August 22, 2013, McFarland biked 4,160 miles across the United States. Looking back on the distance, he said, gives him a different perspective on the place of humanity in the world.

“You can look at a satellite image of the United States and think, ‘wow, that canyon looks familiar, and I can remember biking down that canyon,” he said. “You can look and see a distance that from sunrise to sunset we covered. If there’s any testament to human power and what you can do, that’s a pretty tangible example.”

He and other participants were required to raise $4,500 to contribute to the cause of affordable housing—a problem McFarland described as a “submarine issue” because it is “in our backyards and we don’t even realize it.”

The success of the journey is heavily reliant on the good will of people all across the country who hosted the cyclists in whatever accommodations were available—churches, community centers, gyms, even the occasional baseball field on which the riders would pitch tents and take refuge for the night.

“The trip gave me one of the most organic views that you can get of the United States,” McFarland said. “It wasn’t comfortable. The best place to sleep would be like a church basement with a shag carpet. If they had air conditioning—whew. That was so good.”

Along the way, the wayfarers took 14 rest days, during which they spent the day building with local Habitat for Humanity affiliates or volunteering with other service organizations.