Biologist Looks Among the Microbes for the Origins of Life

As modern scholars typically do, Olga Zhaxybayeva approaches scientific problems from more than one direction. She asks biological questions and uses computer science and mathematics to get answers. Her multidisciplinary approach is known as computational genomics—using sophisticated computer tools to decipher genetic information, information that she hopes will ultimately shed light on the origins of life. Her problem-solving strategies recently won her a 2014 Simons Foundation Investigators Award in the Mathematical Modeling of Living Systems—one of 16 Simons awards in the amount of $100,000 per year for each of the next five years. 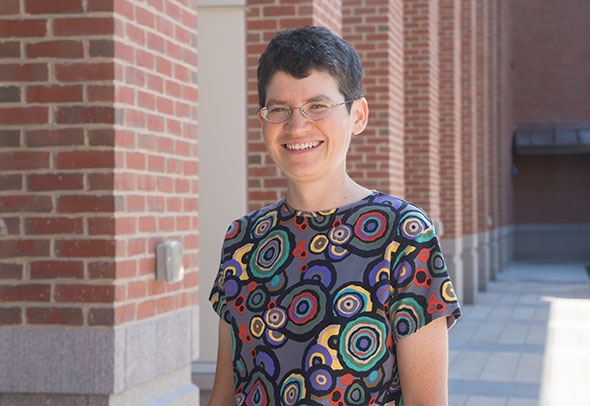 Zhaxybayeva studies how organisms evolve as they adapt to different environments. She concentrates on microbes, she says, because they are the most abundant organisms on Earth and ancestral to multicellular forms of life. Microbes might offer a glimpse into their origins, as well as into the origins of all life. Recent advances in DNA sequencing technologies have produced an avalanche of genomic data.

Trained in her native Kazakhstan as an applied mathematician, Zhaxybayeva became interested in data mining, a computational tool that can be used to discover understandable and useful patterns in large data sets, such as the genetic makeup of cells. “When I was ready for graduate school, it was just the beginning of the genomic boom as the genomes of first viruses and then bacteria were decoded,” she says. “As a computational person, I thought that a great way to get involved in biology might be through the mathematical analysis of genetic information. Comparing genomes to each other may allow us to figure out what happened, how the microbes evolved over time.”

An assistant professor in the Department of Biological Sciences and an adjunct assistant professor of computer science, Zhaxybayeva arrived in Hanover in July 2012 after a stint as a postdoctoral research associate at Dalhousie University in Nova Scotia and a bioinformatics professional in a start-up in New Brunswick. She first came to the United States in 1997 to participate in a NASA planetary biology summer internship program. “I returned home but came back a year later for graduate school and have been in North America ever since,” she says.

As much teacher as scholar, Zhaxybayeva says research and teaching go together. “I cannot do research alone. My teaching is part of training future scientists or nonscientists who want to have the kind of thinking that characterizes science and the scientific method.“

Zhaxybayeva hopes that her scientific pursuits will enhance our understanding of microbial adaptation and evolution, knowledge that has implications for combatting bacterial diseases like MRSA that develop in response to the overuse of antibiotics. ”The bacteria can quickly evolve by gene exchange, so if we understand how gene exchange in bacteria happens, we might be able to find some solutions to the medical challenges posed by diseases,“ she says.

”At the time I was working on my PhD, it was thought that gene exchange was some sort of rare, peculiar process. Now we know that the transfer of genetic information among bacteria is one of the major ways that they operate, how they evolve,“ Zhaxybayeva says. ”Gene exchange is fundamentally important for evolution of microorganisms because it allows them to very quickly find a gene that performs a certain function, rather than trying to invent the new gene from scratch through a mutation.

“We are not only still learning a lot about the various mechanisms of gene transfer, but we are also discovering new ones,” she says. “The Simons money is to investigate one somewhat neglected but unique mechanism of gene transfer that uses a virus as the transfer vehicle. I will study this in detail from a mathematical modeling point of view, and try to understand how it works.”