Two recent deaths—that of actor Robin Williams on August 11 and of Vermont Law School Professor Cheryl Hanna, on July 27—have drawn attention to the link between depression and suicide. Paul Holtzheimer, MED ’99, is an associate professor of psychiatry and surgery at the Geisel School of Medicine, where he also serves as medical director of the Mood Disorders Service. His clinical and research efforts focus on treatment-resistant mood disorders, brain imaging, and brain stimulation therapies. Holtzheimer spoke with Dartmouth Now about depression and suicide. 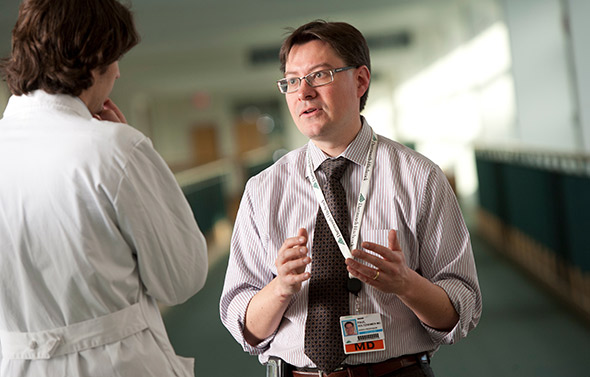 Paul Holtzheimer, MED ’99, is an associate professor of psychiatry and surgery at the Geisel School of Medicine, where he also serves as medical director of the Mood Disorders Service. (Photo by Mark Washburn)

If there were just one thing you want people to know about suicide, what would that be?Fundamentally, death by suicide is preventable. Most suicides occur within the context of mental illness. With appropriate diagnosis and treatment, the vast majority of mental illnesses contributing to suicide can be managed leading to a greatly decreased risk of suicide.

Is it true that the majority of deaths by suicide occur in men?Although women are more likely to attempt suicide, men comprise the majority of deaths by suicide (greater than 75 percent). This is often because men choose more lethal means (such as gunshot, hanging, jumping). There are other notable risk factors for suicide, including the presence of a mental illness, concurrent substance abuse, and older age. However, it is important to recognize that practically anyone, regardless of gender, age, race/ethnicity, or prior psychiatric history, can be at risk for suicide. Therefore, all credible statements suggesting a wish to die or commit suicide should be taken very seriously.

What distinguishes depression that responds to treatment from depression that does not? What are you discovering about this through your research?The majority of patients with depression will respond to available treatments (psychotherapy, medications, and other treatments, such as electroconvulsive therapy and transcranial magnetic stimulation). However, a significant minority of patients (up to 40 percent) with depression do not respond adequately to these treatments, or they relapse into depression despite ongoing treatment. The reasons for this are not completely known. Our research uses brain imaging to identify differences in how the brain functions in patients who do not respond to treatment compared to those that do. We hypothesize that the “functional connectivity” of various brain regions involved in depression is abnormal in patients with treatment-resistant depression (TRD), and that we may be able to treat this with novel interventions such as transcranial magnetic stimulation.

Is there a correlation between depression, addiction, substance abuse, and suicide?The vast majority of deaths by suicide (probably greater than 80 percent) occur in patients with depression. The concurrent use of substances such as alcohol, marijuana, and opiates greatly increases the risk of suicide.

It’s sometimes suggested that a slight recovery from a deep depression can be a dangerous point, in that a patient can recover just enough function to plan and carry out a suicide. Is that true?This is somewhat controversial, though patients in a severe depressive episode often state that they are having thoughts of suicide but they just don’t have the energy or cognitive capacity to carry it out. Theoretically, if a patient improves such that energy and cognitive capacity return before the suicidal thoughts diminish, they could be at greater risk for attempting suicide. However, if a patient is carefully treated (including close follow-up of all patients with suicidal thoughts), this risk can be greatly attenuated.

Can you recommend resources for someone who’s concerned about their own mental health, or someone else’s?There are multiple resources out there. Most importantly, if you or someone you know is contemplating suicide, you should go to the nearest emergency department for an evaluation or call 911. Additionally, the national suicide hotline number is 800-273-8255.

If the concern is less urgent, it is usually reasonable to start with your personal primary care provider. Most PCPs are very comfortable diagnosing and initiating treatment for many psychiatric disorders, such as depression and anxiety. For more complicated cases, an appointment with a psychiatrist or psychologist may be necessary.

At Dartmouth, the main intake number is 603-650-7075. Additionally, the Mood Disorders Service at the Geisel School of Medicine at Dartmouth offers consultations and treatment options (visit mood.dartmouth.edu or call 603-650-4914 to learn more).

Finally, there are a number of online resources offering useful information such as websites for the American Foundation for Suicide Prevention (www.afsp.org), the National Institute of Mental Health (www.nimh.nih.gov), the National Alliance on Mental Illness (www.nami.org/suicide), and the Depression and Bipolar Support Alliance (www.dbsalliance.org).