The World Health Organization announced August 6, 2014, that 932 Ebola-related deaths had been reported or confirmed in Guinea, Liberia, and Sierra Leone. Given the serious concerns about the disease, Dartmouth Now sat down with Tim Lahey, an associate professor of medicine and of microbiology and immunology at the Geisel School of Medicine, for a question-and-answer interview about the outbreak. 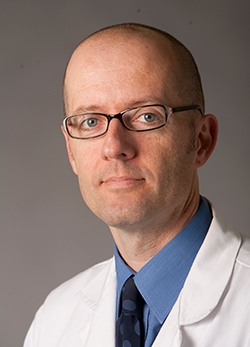 Tim Lahey is an infectious disease specialist and associate professor of medicine and of microbiology and immunology at the Geisel School of Medicine. (Photo by Mark Washburn)

Why is there an Ebola outbreak now?Ebola periodically emerges out of the jungle in African countries and then disappears again once the outbreak runs its course. Most likely human contact with remote animal sources, such as fruit bats or others, allows it to jump into human beings from time to time.

Why is it getting so much media attention?Ebola is a life-threatening, exotic condition from a foreign land, and so easily captures the public’s imagination. This is the largest Ebola virus outbreak in recorded history, and was recently deemed an international health emergency by the World Health Organization, so attention is natural and appropriate.

On the other hand, Ebola is way less dangerous and kills far fewer people than other rampant epidemics, such as HIV, tuberculosis, malaria, and diarrheal diseases, just to name a few.

How does it spread?Ebola is spread from human-to-human via body fluids. All body fluids have been implicated: blood, saliva, breast milk, semen, sweat, etc. People cannot contract Ebola simply by sitting next to someone with it.

Is the high fatality rate being quoted for Africa applicable here in the U.S.?The current outbreak has had a mortality rate of around 60 percent. Since Ebola kills people by causing sepsis—which causes organ failure from inadequate blood flow—one of the major contributors to high mortality rates in Ebola virus outbreaks is the inability to care for sepsis. In developed countries like the United States, with excellent intensive care unit care, I suspect this will reduce the mortality rate for the incredibly small number of people here who are likely to have the infection.

Read more:Everything You Need to Know About Ebola Outbreak (Prevention)

Information About the Ebola Virus and Dartmouth-Related Travel

What are the odds of an epidemic in this country?The odds of a U.S. Ebola epidemic are phenomenally low. Very, very few of the perhaps thousand people with Ebola worldwide are able to travel overseas. Among those who do, for instance aid workers, if they present quickly (or are detected by health care workers or border screeners), then careful infection control can help stave off further transmission.

What are the implications of the disease for the Dartmouth community?Anyone who has traveled to western Africa and who has symptoms suggestive of Ebola virus disease, or has been exposed to someone who fits that bill, should present themselves for medical evaluation and immediately notify caregivers of this possible exposure. Suggestive symptoms are fever, gastrointestinal symptoms, and severe muscle aches within two or three weeks of travel to endemic areas or exposure to a likely case. Very importantly, with such generalized symptoms, people without a clear link to the western African Ebola epidemic should not present themselves for evaluation.

Are any special precautions in order? Caregivers and others managing someone with Ebola virus disease, or someone who is suspected of Ebola virus disease, must take precautions against transmission via contact with body fluids. Specifically they wear masks, face shields, gloves, and a gown. All hospitals should have these materials—there is no need for the special CDC whole-body suits we’ve all seen in movies or on TV.

It’s also a good idea to stay on top of this emerging epidemic. The most reliable source of information is the Centers for Disease Control website.