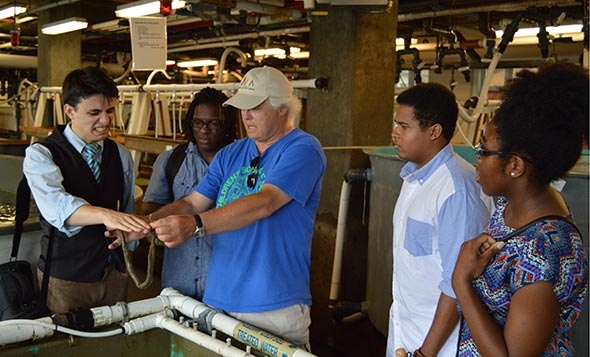 “The Dartmouth program that bears his name provides a community of undergraduate, graduate student, and postdoctoral mentors that can offer strategies for academic and research success,” says Stephon Alexander, theoretical physicist and director of the E.E. Just Program. “The goals of this undertaking focus on STEM (science, technology, engineering, and mathematics) education, primarily targeting Dartmouth undergraduate students of color.”

Robert Cueva ’17, Kirby Spivey ’16, Jared Boyce ’16, and Stephanie Emenyonu ’16 made the trip to the Massachusetts’ research facility, led by Salvador Almagro-Moreno, the E.E. Just Postdoctoral Fellow. The trip was envisaged by Almagro-Moreno, a microbiologist at the Geisel School of Medicine.

Several Dartmouth faculty members were working at MBL at the time of the trip, including Associate Professor of Microbiology and Immunology Deborah Hogan, who was instrumental in organizing the visit, and Professor of Biology Roger Sloboda, who provided a guided tour.

Almagro-Moreno, who is the president of the Dartmouth College Postdoctoral Association, studies the ecology and evolution of the bacterium that causes cholera, what he calls “the coolest research in town.” The trip to MBL afforded him an opportunity to share his enthusiasm for science with the students. 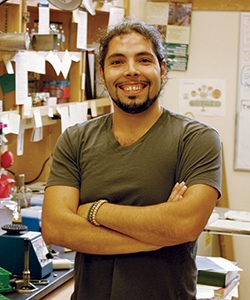 “This reinforced the connection between the E.E. Just Program and the place where Just worked for 20 years,” says Almagro-Moreno. “The trip enabled students to connect with the larger scientific community in a unique way.”

Jared Boyce ’16, whose interest is neurobiology, made the pilgrimage to MBL. He says he was really impressed by how much he was able to see during the visit. “The aquarium had many different species of marine life, even though it was just a fraction of what may live in the waters around Woods Hole,” says Boyce. “One of the coolest things we saw was the MBL library’s rare book collection, like the original autographed copy of Darwin’s The Origin of Species. Seeing the different labs was also an eye-opening experience.”

Budding biomedical engineer Stephanie Emenyonu ’16 says the trip was an extraordinary experience. “It allowed us to dig deeper into the life of E.E. Just. We got to see how his legacy still lives on through the MBL, where his embryological studies really paved the way for future researchers,” says Emenyonu. “The trip was refreshing and encouraging, helping me develop a new passion for the sciences and revealing the possibilities that lie before me.”

The Marine Biological Laboratory is not so much marine as it is biological, a fact not generally known, says Almagro-Moreno. “The researchers they met study neurobiology, climate change, and genetics, for example, from a very multidisciplinary perspective. That is why the group I brought was also multidisciplinary.”

”By the end of the trip they started to realize you don’t just have to have your little niche. Science today is multidisciplinary, as is our E.E. Just Program,” says Almagro-Moreno.