On the Front Line of Health Care in Afghanistan

Read the full story by Jennifer Durgin, published by the Geisel School of Medicine. 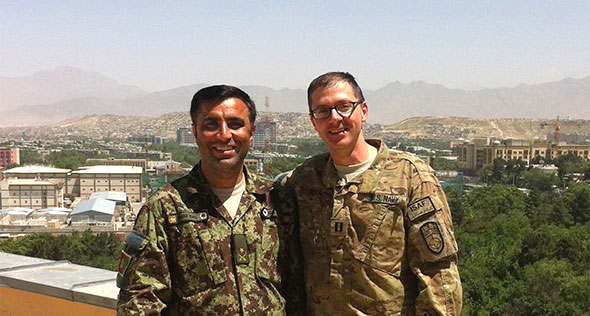 David Royal, MS ’10, at right, with an Afghan physician. The two are working together to improve quality of health care in Kabul. (Photo courtesy of the Geisel School of Medicine)
After 10 years working as a neuroscientist, David Royal, MS ’10, decided it was time for a change. His search for a new career led him to the master’s of science program at The Dartmouth Institute for Health Policy and Clinical Practice (TDI) and—ultimately—to the U.S. Navy. Now he’s putting his TDI education to use every day in Kabul, Afghanistan, where he is deputy chief of operations for the Office of Command Surgeon with the NATO training mission. He recently took a few moments out of his grueling schedule to explain his work helping hospitals transition from being Coalition-led to Afghan-led. How did you end up in Afghanistan? The answer is rooted in the answer to a larger question: “Why the military?” A few months after graduating from TDI, I was reflecting on why I left a successful career in neuroscience. I started to think about the person I’d become after working in the field for more than a decade. For the vast majority of that time, I was working mostly by myself in a small basement room illuminated only by computer monitors. Imagine spending years in social isolation—that was me. I chewed on the topic of my personal growth for a long time, and then it hit me how different I was from the kid who started his PhD in 1999. I realized that I had forgotten how to connect with people, how to work with people, and how to be a team player—“things I learned in kindergarten” kinds of things. Also, although I was essentially the head of a lab for a few years, my leadership skills had not developed one iota, largely because I didn’t feel connected with people. I realized that the person I’d become was ultimately self-limiting; I needed some course correction. My father was a career Navy man, which gave me a front-row seat to the benefits of military experience. Joining the Navy Reserves as a health-care administrator was a no-brainer. I’m happy to say that after four years of military experience, I’m finally feeling like my old self. Can you describe what you are doing in your current post? As deputy chief of operations, it’s my job to help ensure that the wheels of everything medical in Afghanistan continue turning—from logistics to preventive medicine. We have lots of very talented people on the ground doing great work. I stay out of their way and focus on ensuring that their efforts are always aligned with the Coalition’s larger mission. As the transition team lead, I ensure that all of the Coalition’s medical assets are properly transitioned to Afghan control according to the timetable set by Command. The Coalition helped the Afghans stabilize, equip, staff, and run a number of hospitals in the country. With our mission ending, we’ve slowly been transitioning control of these institutions to the Afghans and, instead, taking on a more advisory role. I hold several other titles, too. As lead medical research adviser, I’m giving Afghan physicians guidance on how to set up and run Afghanistan’s very first medical research program. It’s a lot of work. I draw upon my PhD training and research experience. I also draw upon virtually everything learned while at TDI, including a few courses taught by Tuck School of Business faculty. Additionally, I was appointed the lead statistics adviser for, effectively, all of Kabul’s medical system. The Afghans heard that the Command Surgeon had a statistics expert on staff, and before I knew it, I was crunching health-care data for various Afghan hospitals and health-care agencies. Now I meet weekly with various hospital staff to teach them how to collect the right kind of data and how to transform those data into actionable information. Again, it’s a lot of work, but I really enjoy interacting with the local
produit ayant le meme effet que le viagra. equivalent viagra pharmacie sans ordonnance. http://www.pierrepongi.com/ekee/viagra-conditionnement-prix. viagra générique en ligne. utilisation cialis 20mg. http://stage-rando-trial-enduro.com/dmg/pourquoi-spam-viagra/. http://salledekerteuf.com/gater/generique-du-viagra-prix. combien coute le viagra au maroc
nationals.
Written by
Office of Communications
Share this
FacebookTwitterEmail
Quoted
Quote