Geisel School of Medicine microbiologist George O’Toole has received a MERIT award from the National Institutes of Health that will provide up to 10 years of funding for his research on bacterial biofilms. 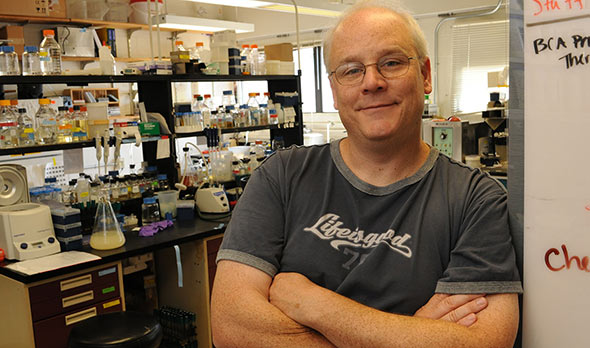 George O’Toole is a professor of microbiology and immunology. (Photo by Jon Gilbert Fox)

MERIT (Method to Extend Research in Time) grants are awarded by the NIH to researchers whose work has already yielded significant results and who it believes will continue to make progress toward understanding important questions in biomedical research.

The program is intended to allow accomplished researchers more freedom and flexibility in their work, and O’Toole is excited about the long-term nature of the award. “It’s not often that you are given such a large window of time,” he says. “I think it’s really going to allow us to take a little more risk.”

O’Toole’s research focuses on biofilms. These communities of bacteria are surprisingly complex, and they are implicated in a number of health problems, from cystic fibrosis to life-threatening infections. Many medications that are effective against individual bacteria cells are rendered almost useless against bacteria in biofilms.