The Hopkins Center for the Arts is using a new grant to continue work that began three years ago to involve young audiences in the performing arts, with an emphasis on classical music.

The grant of $400,000 from the Andrew W. Mellon Foundation provides funding for three years of efforts to engage students and other youths in the performing arts. It is the second Mellon grant awarded to the Hop for its ongoing effort to increase the engagement of younger audiences. 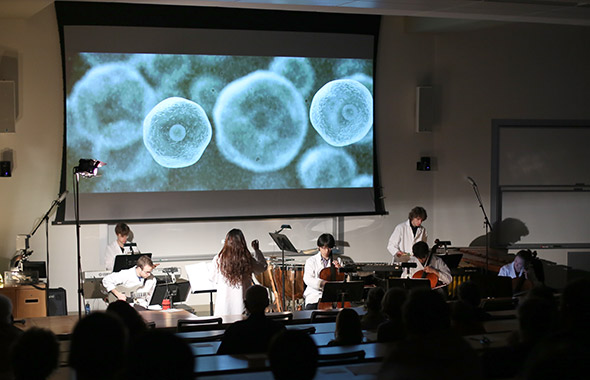 Fay Wang performed with a musical ensemble on April 30, 2014, premiering her work “STEM Arts: Music and Biology.” The work, commissioned by the Hopkins Center in collaboration with the Department of Biological Sciences, was the culmination of multiple research residencies, which explored the relationship between microbial evolution and music. Her visit was the part of a program funded by a 2011 Mellon Foundation grant. (Photo by Rob Strong ’04)

“The Hop has a longstanding commitment to student engagement and to keeping classical music relevant to a broad spectrum of people,” says Jeff James, Howard Gilman Director of the Hopkins Center. “Our previous Mellon grant produced research and programs with huge potential impact, both on our campus and nationally. This next phase will allow us to build on those discoveries. The fact that we were given a second of the Mellon grants is a great vote of confidence for this project.”

With the first grant, which the Mellon Foundation awarded in 2011, the Hop:

▪ Led a national multi-campus research project in 2012 to determine how to increase college student interest and participation in the performing arts, with a focus on classical music, and convened a symposium in June 2013 at which the research partners presented findings and proposals for further action among the 18 campuses that were represented

▪ Piloted and evaluated numerous programs for more broadly engaging students and, through presentation at numerous national conferences, became a “go-to” resource for the field

▪ Commissioned new works of classical music that connected to other forms of music and other academic disciplines, such as a work-in-progress version of a new opera about inventor Nikola Tesla around which the Hop engaged Thayer School of Engineering students and faculty; and formed campus partnerships to directly involve students and faculty in other disciplines. These include an upcoming Hop co-commission for the Kronos Quartet in February 2015, Beyond Zero: 1914-1918, a new work combining music and archival film from World War I.

In the next phase, the Hop plans to:

▪ Build on a 2013-14 collaboration between the Department of Biological Sciences and composer Fay Wang, commissioning works that emphasize campus partners in STEM disciplines, including a piece by composer Tristan Perich for ACME Ensemble as well as potential chamber music collaborations

▪ Expand outreach to first-year students in their first six weeks on campus, a period that research shows is critical in the habits they form for their college years

Funding from the Mellon Foundation helps the Hop add to its rich landscape of live classical music offerings. With world-renowned visiting artists, a pianist-in-residence and four resident classical instrumental and vocal ensembles, the Hop presents close to 20 major classical music concerts each year, some including premieres and Hop-commissioned work. Visiting artists’ residencies include master classes, visits to classroom across the academic disciplines, and informal mini-concerts. Resident ensembles offer special outreach, including the Dartmouth College Wind Ensemble, which in 2014-15 offers concerts linking music and the words of Shakespeare; and the Handel Society of Dartmouth College, which plans special programming around its New Hampshire premiere of James Whitbourne’s Annelies.