Dartmouth researchers demonstrate in a new study that a previously understudied part of the brain, the retrosplenial cortex, is essential for forming the basis for contextual memories, which help you to recall events ranging from global disasters to where you parked your car. 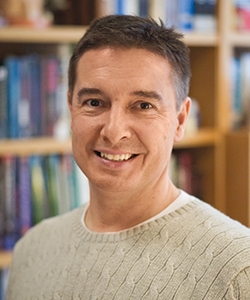 “By providing new insight into the function of this part of the brain, our work will also have implications for understanding the basis for illnesses that impact contextual memory, such as Alzheimer’s disease,” says Professor of Psychological and Brain Sciences David Bucci. (Photo by Eli Burakian ’00)

An important aspect of memory is the ability to recall the physical place, or context, in which an event occurred. For example, in recalling emotionally charged events such as the September 11 terror attacks or the assassination of President John F. Kennedy, we remember not only the event but also where we were when it happened. Indeed, in discussing such events with others, we often ask, “Where were you when ... ?” Processing “where” information is also important for mundane events such as remembering where you parked your car.

Although it is known that a specific network of brain regions is important for contextual memory, it has not been known how different parts of the network contribute to this process. But using a newly developed technology known as “chemogenetics,” Professor David Bucci’s laboratory is beginning to show how different brain structures contribute to contextual learning and memory. Developed at the University of North Carolina School of Medicine, the chemogenetics technique enables researchers to “remotely control” the activity of brains cells. This is accomplished by using a virus to transfers genes for a synthetic receptor into a brain region. The receptors are responsive only to a synthetic drug that is administered through a simple injection. By binding to the receptors, the drug temporarily turns off—or on—brain cells in that region for a short amount of time.

Using this approach, Bucci’s laboratory demonstrated in an experiment with rats that the retrosplenial cortex is critical for forming the basis for contextual memories. It was the first time the chemogenetics technique had been used to turn off cells along the entire retrosplenial cortex. The importance of this finding is underscored by two recent studies showing that the hippocampus, another key brain region involved in contextual memories, is not itself active or necessary for forming the initial associations that underlie contextual memory.

“By providing new insight into the function of this part of the brain, our work will also have implications for understanding the basis for illnesses that impact contextual memory, such as Alzheimer’s disease,” Bucci says. “In fact, recent studies have shown that the retrosplenial cortex is one of the first brain areas that is damaged in persons with Alzheimer’s disease.”

The findings appear in The Journal of Neuroscience.