One Man’s Attempt to Solve the World’s Water Problem

In 2008, a guest went on Comedy Central’s Colbert Report and told host Stephen Colbert that, yes, his invention could turn a vat of urine into safe drinking water. Six years later, with a worldwide shortage of drinking water reaching the United States on a massive scale, finding a viable way to purify water is an increasingly critical issue.

Enter the Colbert guest, Dean Kamen of Bedford, N.H., whose energy-efficient, easily maintained water purifier, the SlingShot, is now being installed in poor, water-stressed communities in Africa and Asia, in a project underwritten by Coca-Cola. 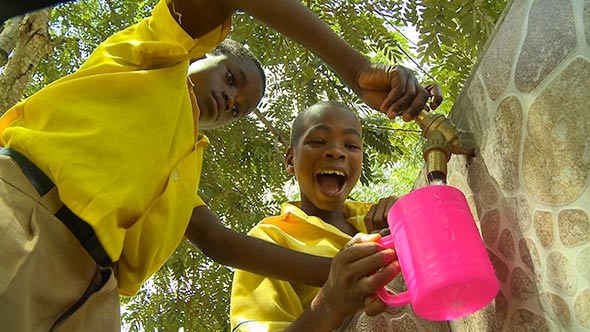 Students at Pakro Methodist School in Ghana try out the SlingShot. (Photo courtesy of the Hopkins Center)

Kamen’s more-than-10-year quest to see the SlingShot from the design stage to implementation is the subject of SlingShot, an acclaimed new documentary film that will have a special advance screening on Friday, August 8, at 7 p.m., in the Black Family Visual Arts Center’s Loew Auditorium. The film’s director, Paul Lazarus ’76, a veteran theater, TV, and film director, will present the film and be on hand for a post-screening Q&A.

As it illustrates the need for viable water purification technology, the film enters Kamen’s world and watches as the man many consider “a 21st-century Edison” sees the project through, including field-testing it in African communities. This year the film has won important awards at six prominent film festivals, most recently netting “Best of Fest” at the AFI Docs festival on July 1 in Washington, D.C.

The machine’s name is derived from the biblical battle between David and Goliath, in which the shepherd boy defeats the giant with a slingshot. “The Goliath of the 21st century for millions of people is bad water,” Kamen told The New Hampshire Union-Leader in 2012, “and all those little villages need a slingshot to deal with that Goliath. The 21st-century slingshot is right here.”

The World Health Organization (WHO) has highlighted lack of clean water as one of the persistent causes of discomfort and illness in less-developed areas of the planet. Only about 2 percent of water on this planet is drinkable; most of us forget that we depend on systems of purification, aqueducts, or wells to bring fresh water to our kitchen faucets. But for much of the Earth’s population, getting fresh water is a daily struggle. Some 300,000 die annually from illness, malnutrition or other factors due to lack of clean water, WHO estimates. 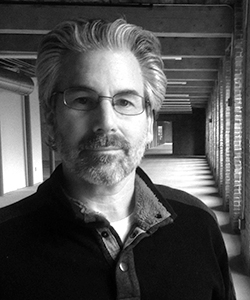 Paul Lazarus ’76, a veteran theater, TV, and film director, will present the film and be on hand for a post-screening Q&A. (Photo courtesy of the Hopkins Center)

Kamen is best known for his Segway Human Transporter, but he has also engineered an electric wheelchair that can travel up stairs (the Ibot), reworked the heart stent, built portable insulin pumps, founded FIRST robotics to inspire young students, and on and on. The holder of more than 440 patents, Kamen devotes himself to dreaming up products that improve people’s lives. For the past 15 years, he has relentlessly pursued an effective way to clean up the world’s water supply. Kamen was elected to the National Academy of Engineering in 1997, received the Heinz Award in 1998, and was awarded the National Medal of Technology in 2000. He was inducted into the National Inventors Hall of Fame in May 2005. Lazarus, who has known Kamen for 20 years, has collaborated on other films about Kamen’s initiatives, including FIRST Robotics.

Just like other types of water purifiers, the SlingShot works by boiling and evaporating water from any source—rivers, oceans, even raw sewage—and then allowing the pure water to condense and be collected. What sets the SlingShot apart is that it is able to do so with a fraction of the electricity or fuel other units require, producing about 10 gallons of clean water an hour while consuming less than 1 kilowatt of electricity, about half the power needed for a handheld blow dryer. This attribute—along with its compact size (equal to a hotel mini-bar fridge) and low number of moving parts—makes it a good match for remote villages with fitful electricity service and low access to technology.

Over seven years, between such projects as directing films, theater and episodes of TV’s Pretty Little Liars, The Middle and Ugly Betty, Lazarus aimed his camera on Kamen as he refined the invention, field-tested it in Ghana in 2011, and wooed and won the major backing that the project required—a saga of ups, downs, advances and reversals. A major advance—one that promises to at last deliver the machine to those who need it most—occurred in 2012, when Coca-Cola agreed to a multimillion deal that would allow Kamen’s DEKA Research and Development Corp. place SlingShots in communities throughout Latin America and Africa.

Lazarus has a 30-year, award-winning career as a director, producer and writer of television, film, and theater projects. He directed and produced the feature film Seven Girlfriends, featured on HBO and Comedy Central; and, for Dreamworks SKG, voice-directed the animated musical feature, Joseph, starring Ben Affleck. Based in Los Angeles, he has directed many notable prime time television series, most recently Pretty Little Liars for ABC Family, Second Generation Wayans for the BET, The Middle, Samantha Who? and Ugly Betty for ABC, and Big Time Rush for Nickelodeon.