For Class of 2018, an Enthusiastic Welcome and Orientation

With the final Trippee groups dancing the “Salty Dog Rag” at Moosilauke Ravine Lodge this weekend, orientation for the Dartmouth Class of 2018 is in full swing. 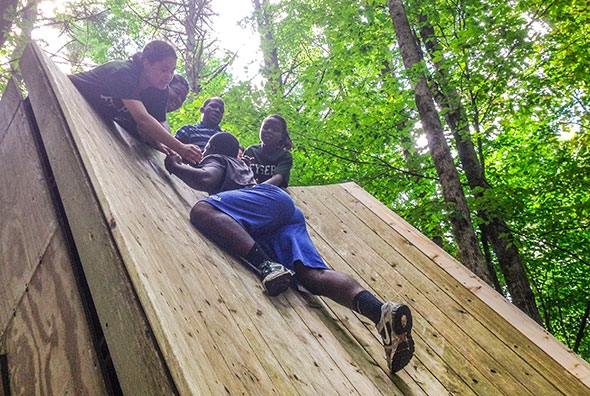 Students in the First Year Student Enrichment Program (FYSEP) take on the “wall” on the low ropes course at Storrs Pond in Hanover as part of their orientation. (Photo by Corinne Arndt Girouard)

The Collis Center for Student Involvement and the William Jewett Tucker Foundation have organized a twilight ceremony for the Class of 2018 to mark the end of orientation and the beginning of the new academic year.

All new students have been invited to gather as a class on the Collis Porch at 7 p.m. on Sunday, September 14, as the sun sets over the Green Mountains. A symbolic passing of the flame, from candle to candle and from 2014 Dartmouth graduates to the incoming ’18s, will be led by Chisom Obi-Okoye ’14, last year’s class president, and a number of other returning ’14s, says Eric Ramsey, senior assistant dean of the college and director of the Collis Center.

Then, as the bells of Baker Tower chime, the group will walk with lighted candles to the Bema, where the Dartmouth Rockapellas will sing Dartmouth Undying and Andrew Nalani ’16, of the Tucker Foundation, will speak about beginning “the Dartmouth journey.“

”Then, in a moment of particularly special significance, everyone gathered will extinguish their candles as a way of closing orientation week and making personal commitments to the upcoming school year,“ Ramsey says.

The ceremony closes with the singing of the Alma Mater as the Baker bells continue to chime.

”It is my hope that the twilight ceremony will represent the best of Dartmouth, a community that celebrates those who came before and welcomes those arriving in positive ways that honor all,“ Ramsey says.

”Seeing the enthusiasm and optimism of the Class of 2018, as well as the pride and commitment of the students who help greet them, is one of the truly wonderful things about the start of the new academic year at Dartmouth,“ says Interim Dean of the College Inge-Lise Ameer.

The first official gathering of ’18s will be Tuesday, September 9, but the schedule of meet-and-greets, advising sessions, and student life orientations has already begun.

The First Year Student Enrichment Program (FYSEP), tailored for students who are the first in their family to go to college, began September 2. They have a week of introductions to the academic and social life of Dartmouth with faculty, deans, support staff, and peers, leading up to orientation week.

Incoming international students have a similar, overlapping schedule, as do incoming Native American students, but each program also includes sessions unique to that group. The Native American pre-orientation for example, includes a dinner with Native American Studies Professor Collin Calloway, who talks about Dartmouth’s history and involvement with Native people.

Orientation for all ’18s begins September 9, with move-in day in the residence halls, advising on fall-term course selection, student-activities presentations, a greeting from Ameer, and a welcome for parents and families by President Phil Hanlon ’77.

And that’s just the first day.

”Over six days of orientation the entire Dartmouth community—faculty, deans, support staff, our advising network, student leaders—works very hard to ensure that all first-year students have a picture of the exceptional opportunities that lie before them,“ Ameer says.

Orientation runs through Sunday, September 14, ending with a twilight ceremony where members of the Class of 2014 will literally pass the flame to the Class of 2018, from candle to candle, followed by a procession from the Collis Center to Bema, just hours before fall-term classes begin on Monday.