President Phil Hanlon ’77 and Provost Carolyn Dever formally opened the school year with encouragement and promises of support, as they addressed the newest members of the Dartmouth community assembled at Convocation 2014. 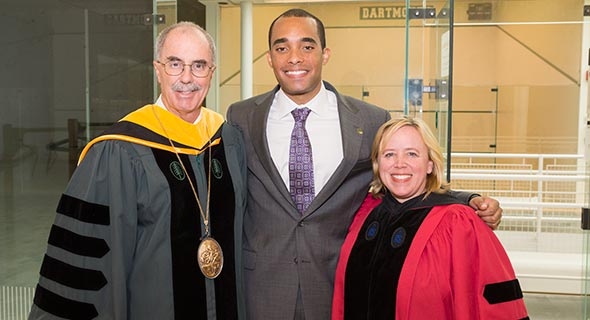 Members of the Class of 2018 and new graduate students heard calls to find strength in Dartmouth’s diversity and to dare to take on difficult problems, making full use of the powerful opportunities Dartmouth offers.

"Dartmouth's greatest resource is, undoubtedly, its people: Its world class faculty and you," said Dever in the ceremony's address, her first speech to the Dartmouth community. "The most vital work of our institution is what you and the faculty accomplish together, exemplary scholarship, cutting-edge research—your intellectual transformation." 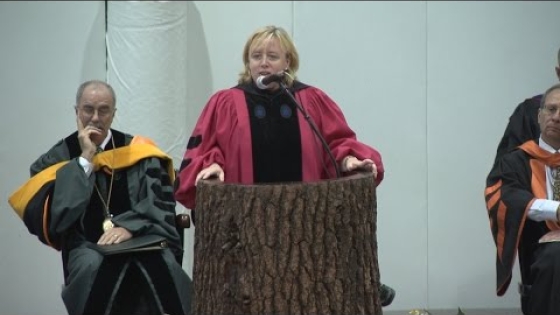 About 750 students, faculty, and staff attended the afternoon event in Leede Arena, which opened with an academic procession led by Dean of Libraries and Librarian of the College Jeffery Horrell, carrying Lord Dartmouth’s Cup in his role as College usher. Interim Dean of the College Inge-Lise Ameer presided over the ceremony, welcoming students, faculty, staff, and alumni attendees.

"I love the first day of school, when everything's possible," Ameer said.

Director of Religious and Spiritual Life the Rev. Nancy Vogele ’85, in a prayer, hoped for safety, happiness, and health for each student.

In remarks to the crowd, Student Assembly President Casey Dennis ’15 said inspiration for his speech came as he was “sitting around a fire in the woods surrounded by my closest friends,” on retreat with the Student Assembly Executive Board at the Class of ’66 Lodge. Through the stories they told each other, he said, there emerged a glimpse of something they shared: a vision of a better Dartmouth.

That vision, Dennis said, will take shape when Dartmouth draws on its diversity: “Now that you’re at the threshold of starting your Dartmouth career,” he told the first-year students, “don’t hide the thing that made you different. … Use this community, the alums, your peers, and your professors to unleash your own potential and the potential of the ’18 class in its entirety.” 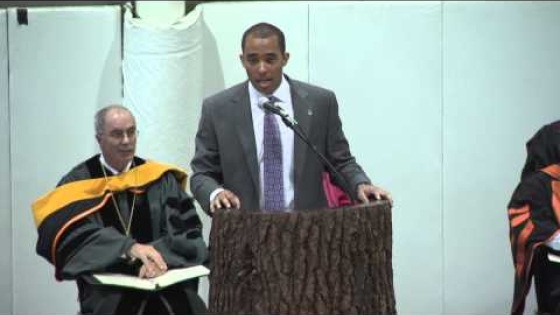 Kyle Dennis ’15, the twin brother of the speaker, as well as their parents, Michael and Nathalie Dennis of Chester, N.J., were in the audience.

The Dartmouth football team was there in full force too, Big Green spirit evident in the team polo shirts the players wore.

Dever, who joined Dartmouth on July 1, spoke about her work as she recalled a video published by the student newspaper, The Dartmouth, in which students were asked about the role of the provost.

Dever explained that her work centers on ensuring and building on Dartmouth’s academic excellence. In particular, she said that her role is strategic and forward-looking, dedicated to understanding “where, how, and when should we invest to situate Dartmouth most powerfully for the future’s best opportunities.”

“Breaking new ground is hard,” Dever said. “Asking tough questions and pursuing bold ideas is not easy; it isn't easy for anyone.” But, she continued, “It's OK to fail. Excellence isn’t the absence of failures; it’s the sum of determinations.”

Dever made several commitments to the academic community: first, to support bold ideas, “from start to finish—from when they're just delicate ideas in your mind, to when they're codified and canonized in print or on screen, or otherwise in the medium of your choice.”

Second, in committing to recruit and retain a diverse faculty and student body, Dever noted that excellence “isn’t one-dimensional. It demands a multiplicity of viewpoints and voices, and an abundance of healthy discourse,” conducted with mutual respect.

Finally, in affirming Dartmouth’s plans to develop house-based living/learning communities, Dever reminded the new students that each one of them is a “Dartmouth student 24-7-365, and a member of the Dartmouth community for life.”

President Hanlon put the first-year class on notice to watch for “the moment that unleashes your energies,” when the call comes to “dare to make a mark” by taking on a great issue of the day, “issues that elude even your professors and the great thinkers and policy makers.” 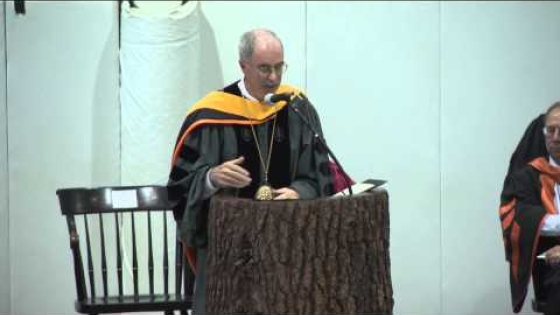 Putting a list of profoundly challenging puzzles in front of the group, including those posed by energy, health care, and education, Hanlon charged the new students to have the courage to innovate, to change the game.

Hanlon reminded the audience that there is strength in inclusion. Power comes from different perspectives coming together, across disciplines, across schools, across sectors—business, government, non-profits—across generations, and across the globe.

“Dartmouth, uniquely, has the power to convene these many groups, and to bring together their diverse perspectives and expertise," he said.

“Look for the talents that lie in every member of our community,” said the president. “And for the Class of 2018, we anxiously await those moments that will determine how you will apply the great tools at your disposal against work that demands the very best of you.”

The Dartmouth Gospel Choir and the Dartmouth Glee Club performed “America the Beautiful” during the event, and led the crowd in the singing of Dartmouth’s “Alma Mater.” Music for the prelude, processional, and recessional was played by the New England Brass Consort.

Prior to the ceremony, Hanlon and his wife, Gail Gentes, hosted a cookout lunch for the community on Tuck Mall. The band Sol Food entertained the hundreds of students, staff, and faculty members who gathered for the meal on an iconic Hanover fall day of blue skies, bright sun, and cool air.

Watch the full the Convocation ceremony.