As demand increases for news analysis on Islamic terrorists and the rise of the Islamic State in Iraq and Syria, Daniel Benjamin makes frequent treks across campus to the Dartmouth television and radio studios—sometimes multiple times a day—to talk to international media. 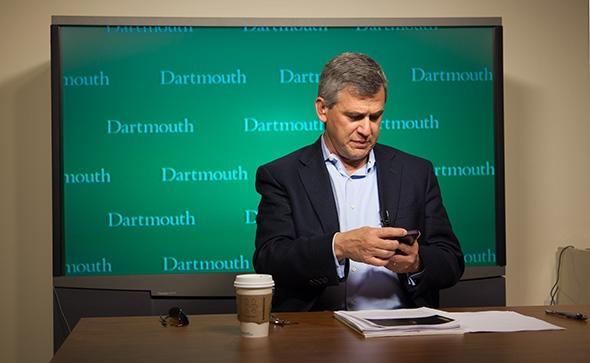 These media outlets often call on Benjamin, the Norman E. McCulloch Jr. Director of the John Sloan Dickey Center for International Understanding, for his expertise as the former Coordinator for Counterterrorism at the State Department and adviser to Hillary Clinton during her term as Secretary of State.

But he also knows the news media from the inside.

“I was bureau chief for The Wall Street Journal in Berlin when I was offered a job as a foreign policy speechwriter for President Clinton,” says Benjamin. “I guess I’ve always been attracted to the jobs that promise a great education. That time I certainly got it.”

Three years into his White House job, Benjamin heard from Richard Clarke, a member of the National Security Council (NSC) often referred to in the media as Clinton’s counterterrorism czar. Clarke offered him the post of NSC director for counterterrorism as Clarke built the new office of National Coordinator for Counterterrorism, Infrastructure Protection, and Security. Clarke had already brought aboard Steve Simon as an NSC staff member. Benjamin and Simon later co-authored the book The Age of Sacred Terror: Radical Islam’s War Against America, published in 2002.

The working title for the book was “The Coming Age of Sacred Terror,” Benjamin says. “Then, after 9/11, our publisher said, ‘I guess it’s now The Age of Sacred Terror.’ ” The book was later named a New York Times Notable Book and won the Arthur Ross Book Award for the year’s best book on international affairs by the Council on Foreign Relations.

The two later worked together under Obama, Benjamin in the State Department, and Simon on the NSC, where he was senior director for Middle Eastern Affairs. Now, with the start of fall term, Simon is a visiting lecturer in government at Dartmouth, teaching the class “Intelligence and Policy.” 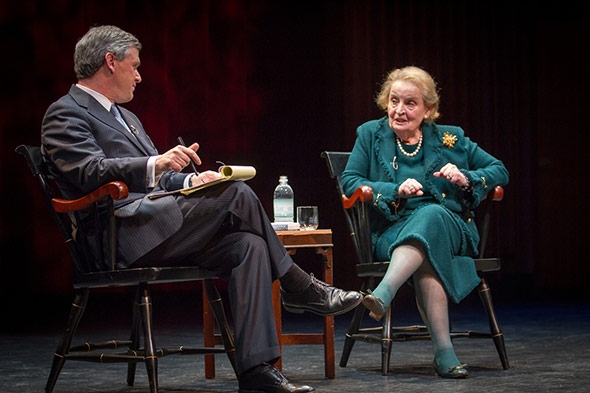 Benjamin recalls when he first met Simon in the Clinton White House.

“I was used to people saying, ‘you’re so lucky to be here, it’s such a great time to be here,’ “ Benjamin says. ”I met Steve and he said, ‘What were you doing?’ I said I was a foreign correspondent in Europe. There was this long silence and he said, ‘You gave up that for this?’ “

Simon’s impression of Benjamin when they first met is delivered like a Catskills one-liner: “He was young and handsome … I don’t know what happened.”

During his time in the private sector, between stints at the White House, Benjamin was a scholar at the Brookings Institution and the Center for Strategic and International Studies. His foreign policy analysis was featured regularly on television, in newspapers and journals, and he produced several scholarly works, including Sacred Terror and The Next Attack: The Failure of the War on Terror and a Strategy for Getting it Right. He says the transition to Dartmouth was seamless.

”It’s been wonderful,“ he says. ”The horizons are different; the pace is a little different. But it’s inspiring to be among people who are interested and expert in so many different things. It’s a terrific change from Washington’s monoculture.”

And Benjamin has brought many of his connections to the Dickey Center to meet with students, faculty, and Dickey fellows, for lectures, to work as visiting scholars, and to interact with the academic community during short-term residencies.

Over the past year, the center has hosted visits from world leaders including former Secretary of State Madeleine Albright, former Israeli Prime Minister Ehud Olmert, and past Commander of U.S. Central Command General James Mattis.

Michael Morell, former deputy director of the CIA, is in residence from September 29 through October 2. On October 28, Thomas Bagger, head of policy planning for the German Foreign Ministry, will give a public address at Dartmouth.

Benjamin has only continued a long-standing Dartmouth practice of connecting students with foreign policy and analyst experts in government, he says.

“I’ve been told by people in the intelligence community that there has been a significant uptick in the number of Dartmouth people there. And there are a lot of people from Dartmouth in the State Department, no question,” Benjamin says.

At the White House, Benjamin frequently ran into his friend Todd Stern ’77, the State Department’s Special Envoy for Climate Change, and worked through policy issues with Francis Ricciardone ’73, United States ambassador to Turkey.