Read the full story by Larry Di Giovanni, published by the Geisel School of Medicine.

This is the second piece of a four-part series examining the Geisel School of Medicine’s long-standing work in primary care with Native American and Alaska Native communities. Read part one here.

Liam Guerin, a Geisel School of Medicine second-year student who participated in the school’s alternative spring break in Minnesota in March, spent part of his summer conducting a health survey within The Little Earth of United Tribes, a housing development of approximately 1,000 Native American residents in Minneapolis. As one of the survey interviewers, Guerin asked residents “about their health from every angle—physical, spiritual, emotional, and chemical.” 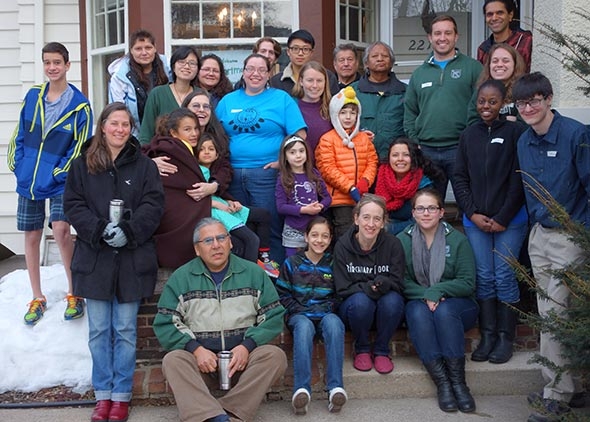 Angela Erdrich ’87, MED ’94, front row, second from the right, and her husband, Sandeep Patel, back row, far right, hosted Geisel students at their home during the 2014 alternative spring break trip to Minnesota. Erdrich and Patel work with Native American communities in Minneapolis and in South Dakota, and serve as mentors to Geisel students. (Photo courtesy of the Geisel School of Medicine)

One of the survey goals is to develop data from 400 participants that will be used to produce grant funding connecting Little Earth residents with new resources for improved community health. An example would be a program for traditional Native American spiritual healing. Survey findings will also help to foster “talking circles” that keep residents connected to ongoing issues.

Guerin described his interviews with Little Earth residents as “very intense.” He spent about an hour with each resident, and interviewed 35 in one week.

“It’s one thing to read stories about chemicals that are affecting different urban Native American populations and reservation populations,” Guerin said. “It’s another thing to talk with people directly who have lost loved ones, and who are themselves dealing with addiction. The survey is part data gathering but it’s also part counseling almost. I have found myself using a lot of the counseling skills learned from my first year of medical school at Dartmouth.”